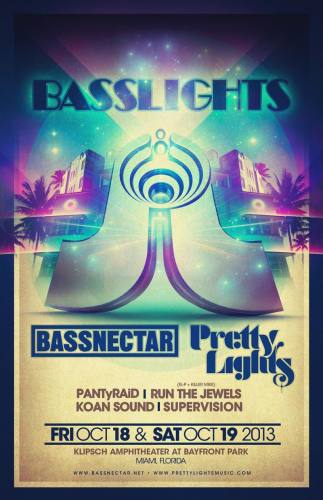 Bassnectar and Pretty Lights will be reviving their BassLights series with a two night residency at Klipsch Ampitheater at Bayfront Park in Miami on October 18th and 19th. Bassnectar is fresh off the release of his Immersive Music Mixtape Side One and the announcement of the "Immersive Music Tour 2013", while Pretty Lights has just released his latest album A Color Map of the Sun to much fanfare. PANTyRAiD and SuperVision will support on October 18th. Direct support on October 19th will come from El-P and Killer Mike performing as Run the Jewels with Koan Sound opening the show. Presale tickets go on sale tomorrow, July 31st at noon EST, with public on sale Saturday, August  3rd at 10am EST.