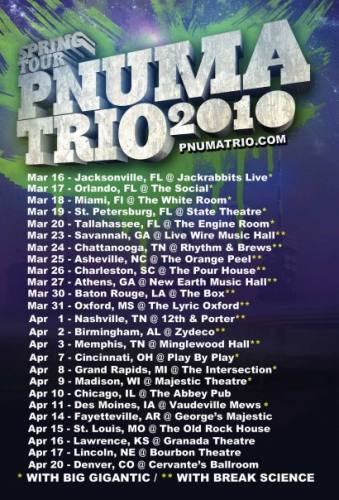 PNUMA TRIO with BREAK SCIENCE
WE ARE THRILLED TO FINALLY GET PNUMA BACK TO TOWN.
PNUMA TRIO | 9:30 PM
The Pnuma Trio is the latest addition to the electronic music scene, bringing with them classical, jazz, funk, hip hop, and drum and bass influences. Their music, although full of youthfulness, can be enjoyed by a diverse audience. A recent article in Art Voice magazine dubbed the Pnuma Trio the “music of the future.“
The Pnuma Trio was born in December 2004 and began practicing and performing in the birthplace of rock and roll, Memphis, Tennessee. The Pnuma Trio has been well received in their hometown and found a similar warm welcoming from music lovers across the country. During their short career, Pnuma has toured the country extensively, playing over 150 shows, and was also the only American band at 2006’s Exodus Festival in Australia. They have shared the stage with the Disco Biscuits, Lotus, Zilla, Michael Franti, and others.
After playing the Langerado festival in March, finishing their most recent tour of the east coast and northeast, and releasing their first live album, “Live from Out There“ on Harmonized Records, Pnuma is gearing up for a summer filled with music festival appearances, including Wakarusa, Summer Camp, and Smilefest.
The Pnuma Trio consists of Alex Botwin on bass guitar, Ben Hazlegrove on keyboards, and Lane Shaw on drums. Botwin's ability to play a wide variety of instruments allows him to channel that knowledge into his versatile bass playing. Through his skillful utilization of an array of today’s technological tools and a knack for sound, Alex cultivates a new and refreshing touch on the bass, providing the steady pulsations that drive the Pnuma sound. Hazlegrove received classical training at the Berklee School of Music. His jazz mentality and emotional style is the lifeblood of the Pnuma sound. Shaw, a product of a musical family, provides the backbone to the group. Lane's funk, trip-hop, jazz and drum n’ bass influences color the band's groove and keeps the music fresh and moving forward.
The chemistry between these musicians is priceless. The vibrant and soothing energy that they emit is the unique element, which sets them apart from other electronic acts. Pnuma has soul.
Within the electronic music community, the buzz surrounding the Pnuma Trio is growing at a steady pace. According to Jambase.com, “They’ve become one of the most talked about young bands in the country.“ 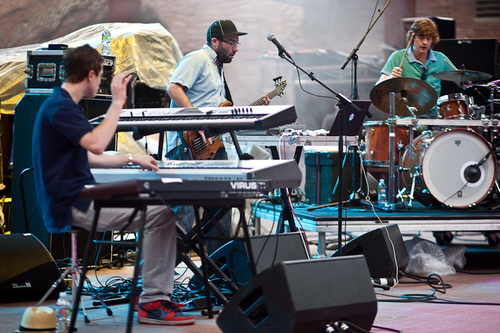