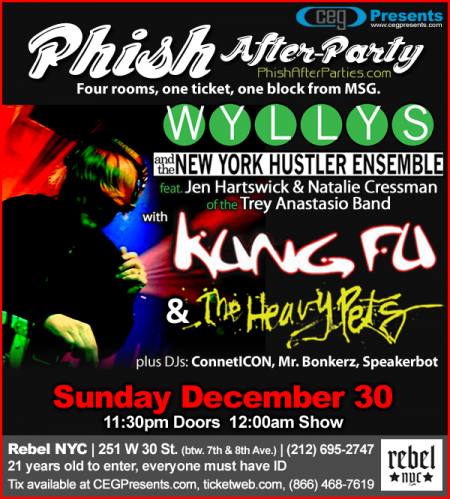 
Rebel contains four separate rooms on 2 different floors. One ticket gets you into all four rooms. Wyllys & the NY Hustler Ensemble and Kung Fu will alternate sets in the Performance Hall. The Heavy Pets will play two sets in The Loft. DJs will appear in the VIP Room as well as in the Loft before and in between sets of The Heavy Pets.

with Jen Hartswick & Natalie Cressman of the Trey Anastasio Band


This show serves as an anniversary of the band's inception 3 years ago to the day. The New York Hustler Ensemble started as an experiment conducted by Wade Ellis Wilby, better known to us as Wyllys. He felt that disco, being at a slower pace, had more room in the measure for a live band to create inside of to give tracks that normally wouldn't move a dance floor some much needed emphasis and texture. Now, 3 years down the road and an all-star list of alumni including Brendan Bayliss, Joel Cummins, Brock Butler, Scott Metzger, Eddie Roberts, Todd Stoops, and Chris Michetti just to name a few, The NY Hustler Ensemble plans to to on hiatus after Jam Cruise to focus on their first full length LP of originals.