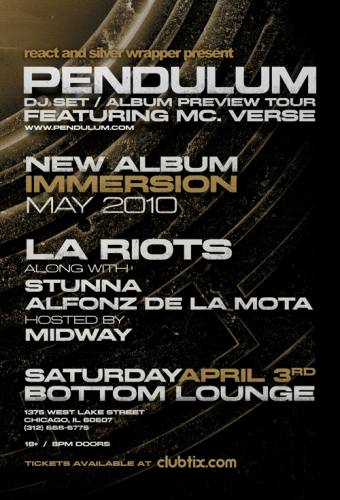 PENDULUM (DJ SET) feat MC VERSE • L.A. RIOTS • STUNNA • ALFONZ DE LA MOTA
* PENDULUM (DJ SET) feat MC VERSE
Formed during 2002 by three musicians from Western Australia with similar visions and musical backgrounds, Pendulum’s mission has always been to pull together their production resources, ideas and influences from various styles of music, to create a new sound that they felt was missing from dance music. The individual members behind Pendulum have been active in Perth’s live music scene for several years: producer / vocalist / keyboardist Rob Swire and producer / bassist Gareth McGrillen played together in the acclaimed Perth band Xygen, while Paul ‘Elhornet’ Harding had been a veteran of the Perth DJ scene.
* L.A. RIOTS
L.A. Riots are a loud pop band featuring Jeff Byron, Wayne Lewis and Dave Neher. Their material is in the spirit of the Kinks, the Jam, T. Rex and the Attractions. They have played gigs all over Los Angeles, including shows at Spaceland, the Echo and the Smell—even a night opening for local heroes the 88 at the Viper Room. In fall 2003 they released their debut recording, the Start A Riot E.P.
* STUNNA
Attracted and influenced by the likes of jazz, House, and the synthesised early-70s vibe of Herbie Hancock, the day the precocious 12 year-old Jay got a hold of a drum machine and an 8-bit keyboard with a built-in sampler things really started cracking.
* ALFONZ DE LA MOTA
De La Mota has been djing drum n bass since 1994 and promoting events since 1998. He has played well over 20 cities all over the United States since his start. He is also one of the founders of the M.I.A. arguably one of the largest drum n bass dj collectives in the USA dedicated to the drum n bass sound.