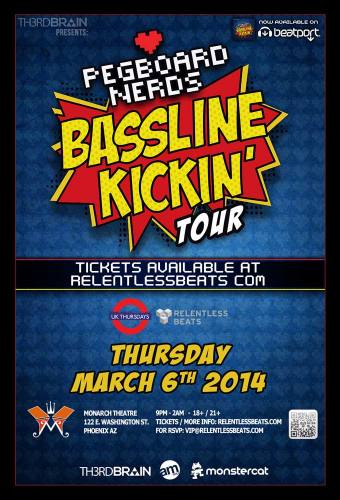 Relentless Beats and UK Thursdays presents the “Bassline Kickin’” Tour featuring Pegboard Nerds at Monarch Theatre in Downtown Phoenix on Thursday, March 6, 2014. Experience BASS on 30,000 watts of PK Sound! This is an 18+ show.

On trajectory from Denmark and Norway, the Pegboard Nerds have crash landed on the global electronic music landscape with meteoric force. The impact of their genre-bending music has been felt by peers and industry mainstays alike. With a string of hit singles on independent Canadian label “Monstercat” gaining millions of plays and the attention of fans over the world, it’s no coincidence that the hottest names in the game have begun to pay attention. From collaborating and remixing the likes of Krewella to Infected Mushroom, to being hand selected by Knife Party as show support, Pegboard Nerds’ ticket to international acclaim has been stamped.

RSVP to the event on Facebook and buy tickets with the links above. For reservations information, email vip@relentlessbeats.com.   Join our text list by filling out the form in the upper right of this page or texting RB VIP to 88202.