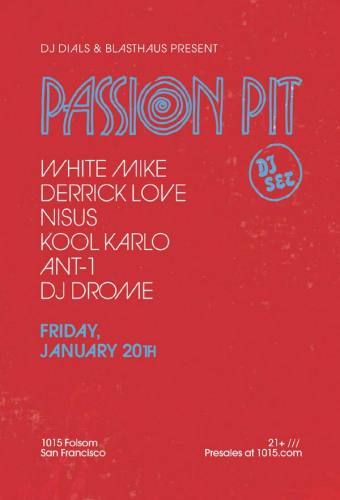 
Michael Angelakos hears music in his head and knows exactly how he wants it to sound. The young composer/performer has already created two studio masterpieces – Manners and Chunk of Change – and – with his fellow musicians in Passion Pit – is taking his perfectionist pop vision to a whole new level in concert.


In a little more than a year, Passion Pit has evolved from a one-man dorm room project into a burgeoning band that has surged above the buzz, capable of selling out three nights at New York’s Terminal 5 (January 2010) and a night at Prospect Park in Brooklyn. Passion Pit has even landed high-profile slots on a series of international festivals including Australia’s Big Day Out and the UK’s Glastonbury Festival as well as North American festivals including Bonnaroo, Lollapalooza and Coachella.