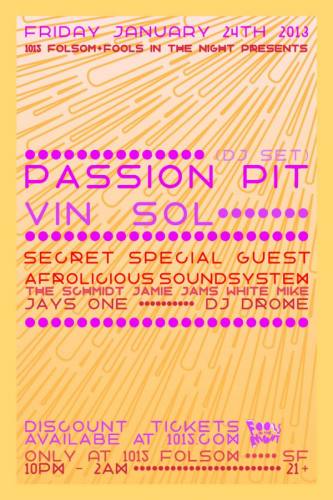 For Passion Pit, it all started with a one-man band. Michael Angelakos composed songs with his laptop for his then-girlfriend as a belated Valentine’s Day gift. He played solo several times in the Boston area, performing “Chunk of Change” which would later make it to the band’s EP. Angelakos’ act caught the attention of fellow musician Ian Hulquist.


“Ian asked me if I wanted to hash it out and make it a band. It was a one CD deal and I had seven projects at the time and this one project was made for my girlfriend at the time. Out of boredom, we got booked. I thought, ‘I guess we will play a show and I’ll take it seriously’,” Angelakos told Artist Direct. Hulquist brought along his buddies from Berklee College of Music to form Passion Pit in 2007.


The EP “Chunk of Change” was released in September 2008. It consisted of four songs that Angelakos wrote for his girlfriend at that time and two new tracks “Sleepyhead” and “Better Things”. “Sleepyhead” was eventually released as the only single from the EP. With its commercial quality, the single propelled the band’s name higher.


The band began working on a full-length album, resulting in “Manners”. Angelakos said of the album, “There was no list of influences that we can rattle off, nor do we go into a process for songwriting or recording and production with a sound in mine.” The song “Sleepyhead” was remastered for the album but it was “The Reeling” that made it as the lead single.


“Manners” was released in the United States on May 19, 2009. “The Reeling” was charting at Billboard Alternative Songs, so was “Little Secrets”. Most of the tracks from the album were used in either TV series or commercial ads. The band further supported the album with a performance at the high-profiled Glastonbury Festival in 2009 and a tour in North America.


“Manners” was re-released as deluxe edition in April 2010 with additional tracks. The band continued making appearances in cities around the States as the opening act for Muse. They also went on college tour for two weeks in 2010. Meanwhile, work on the second album was kicked off in the same year.

Armed with more than ten years of DJ experience, Vin Sol’s masterful live sets, production, critically acclaimed mix tapes, and dedication to the tradition of party rocking have made him one of the most influential and in demand DJs around. Born and raised in San Francisco and currently residing in New York, Vin is known as a master of the profession with a forward thinking approach to DJing and an unusually deep knowledge of music history. These skills collide in his production, whether it be with his group Caligula or his own projects. Influenced by the Bay Area’s diverse music scene of the 1990’s, Vin began digging for rock, soul, funk and disco, club and hip hop records as a kid and his legendary collection will never stop growing.


Vin’s musical wizardry hasn’t gone unnoticed by The Fader, XLR8R, and local press. In 2008, he was the winner of Smirnoff and 7X7’s Best DJ in SF competition and he is just getting warmed up . . . Look for Vin in New York, where his latest rare finds are hitting the clubs.