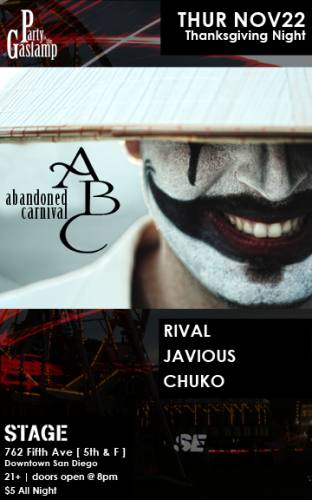 What: Party In The Gaslamp! *Thanksgiving Edition*

Promoters: Party In The Gaslamp


...On His Way To Winter Music Conference!


Abandoned Carnival (Christopher London) came to San Diego in the earlier part of 2008 expecting to take his music career to an inclined level. With an extensive resume as a Musicain/Dj in the Midwest and West Coast for 13 plus years, Chris decided it was time to let the world hear his thoughts through music at a larger scale. Collaborating with local Artist/Sound engineer Michael Ault who has toured the U.S. for 10 years with his former rock band, Chris discovered a distinct sound in production which has lifted heads across the map. In 2012, Dj Godfather (voted #15 as America's best Dj 2 years in a row) took an interest in a track titled, "We Speak Chinese" and remixed it for a soon coming release. Getting ready for upcoming tours, expect to hear Abandoned Carnival's distinct sound in original tracks and remixes with upcoming releases.