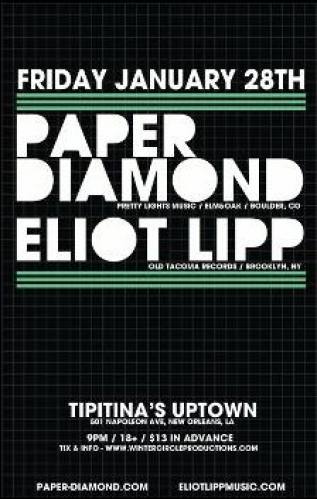 PAPER DIAMOND - Forward is not just a direction, it's a way of life for Colorado based producer Alex B who is rolling out big tunes under the new guise of Paper Diamond in 2011. The new project ï¬nds the trusted producer moving into previously untraveled musical territory.

The Paper Diamond sound has raw energy and the kind of dramatic anticipation only a seasoned producer can incite. Driving beats and bass grab on tight while deep, rich tones rumble under layers of spacey synthesizers, sweet melodies, and catchy vocals. One thing is for sure. The energy is high.

In keeping with the way of the future, Paper DiamondÊ¼s debut EP

Levitate will be available for free download from PRETTY LIGHTS

ELIOT LIPP - Eliot Lipp didnâ€™t choose to become one of the most looked to artists in contemporary electronic music, but somehow, Lippâ€™s sound, one that uses vintage gear to create a unique take on Hip Hop and House, has quickly garnered the respect among the industryâ€™s most influential musicians and producers as well as the deep admiration among audiences worldwide.

Since being discovered by Scott Herren (aka Prefuse 73) in the mid 2000â€™s, and releasing albums on the cutting edge labels Eastern Developments, Mush and Hefty as well as backing the hype with a relentless touring schedule of influential live shows all over the globe, Lipp has quickly become one of the barometers for the revival of electronic music in the States.