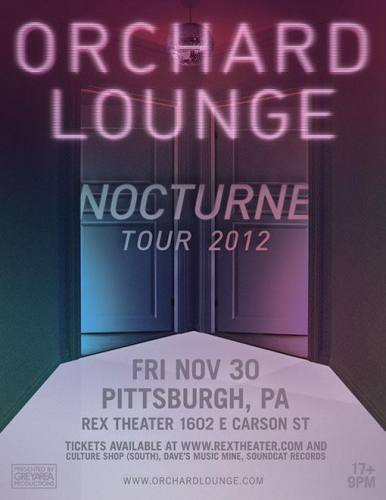 Downtempo, space disco, house, tech, b-boy-era electro, hip-hop, soul, and funk — if you can move, Orchard Lounge will back you up. OL is the Chicago based collective of Ben Silver, Spencer Lokken and Bethany "Queen B" Lokken. For ten years now this versatile trio has enlightened dance floors nationwide with their eclectic mixes, from sunset chill-out to bass-dropping tech house, and an array of other futuristic sounds. Theirs is a democratic mission: to expose as many people as possible to the artists they admire and respect.

In recent years Orchard Lounge has built a reputation on long, late-night sets around the country, as well as their popular residency at Chicago's Smart Bar. You won't only find them in the club however, they also have shared the stage with a number of bands of all styles and have played legendary venues from Red Rocks to the Hammerstein Ballroom. For years, OL has played shows with bands such as The New Deal, The Disco Biscuits, and countless others. Rather than just open the show or play during setbreak, on many occasions they have collaborated onstage with on the fly segues, fusing the live instrumentation with records. The trio can also be seen playing a number of festivals around the country every year such as Electric Zoo, Camp Bisco, and North Coast Music Fest, to name a few. They've played alongside heavyweights like Booka Shade, Lindstrøm, DJ T, Jamie Jones, Bonobo, Aeroplane, Spiritcatcher and many many more. On any given weekend you might find the jet-setting trio in New York, Denver, Miami, Richmond or St. John.

Outside the booth, the members of Orchard Lounge continue making music: Spencer is a classically trained violinist and regularly plays with a trio in Chicago; Ben has studied guitar for more than twelve years, and continues to write and produce; Bethany hung up her clarinet in college. They are currently focusing on original productions to add to their arsenal. Despite their affinity for live music, OL's M.O. hasn't shifted since the group's inception: to provide sophisticated and stylish DJ sets that are appropriate in a variety of settings- from the dance floor to the couch.