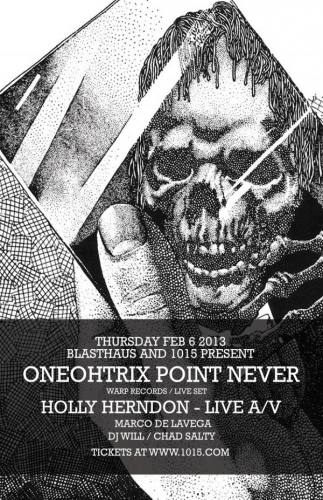 
In October, Oneohtrix Point Never, aka Daniel Lopatin released his critically acclaimed record, R Plus Seven, via Warp Records. While the new album contains many familiar sonic touchstones for listeners who have followed the composer's development over the last half-decade, his Warp Records debut is a major departure from his previous work. Lopatin's experimental inclinations lurk behind the scenes, while the music itself comes as close as Lopatin has ever gotten to anything resembling traditional song structure. R Plus Seven is disruptive and hypnotic in equal measure, and the fun of it lies in trusting Lopatin as he guides you past — and often through — its succession of walls and mirrors.


Praise for R Plus Seven:


"R Plus Seven is both celebratory and reverential, excited and excitable." – NPR


" . . . another intriguing chapter from an artist whose work remains alive with possibility." –Pitchfork


"Lopatin opens his album with a swell of organ to set the mood, but soon quickens it to strobe-light intensity, shreds a chorale until all that's left is a gasp, and sprays all of it across the stereo field to the point of dizziness" – SPIN


"R Plus Seven is an astounding thing to behold, a perfectly imperfect and downright breathtaking masterpiece" – XLR8R


Oneohtrix Point Never is Daniel Lopatin, a US native at the forefront of the modern electronic composition scene. Though Lopatin’s rise felt meteoric following his 2009 double-disc anthology ‘Rifts’ and its 2010 follow-up ‘Returnal’, (praised by the likes of Wire, Pitchfork, Fader, Guardian UK, The Quietus, and XLR8R) his love of polyphonic synthesizers dates back to childhood jam sessions with his father’s Roland Juno-60, an instrument which, like B.B. King’s ‘Lucille’, he has never left behind.


‘Replica’ is an electronic song cycle based around lo-fi audio procured from television advertisement compilations. These sample-based meditations are as lyrical as they are ecological, featuring re-purposed “ghost vocals” which serve as narration for Lopatin’s signature amorphous, ambient passages. The placid, synthetic surroundings of ‘Returnal’ are accelerated via darker, propulsive terrains using samplers, analogue filtering, tape manipulation, acoustic piano, plate reverb and sub-frequencies.


On December 17, 2011 PopRally premiered the multimedia performance ’RELIQUARY HOUSE’ by OPN and visual artist Nate Boyce, created specifically for The Museum of Modern Art as a re-imagining of modernist sculptures from their collection. Daniel has also composed music for a troupe of 16 quadrotors (flying robots) to dance to and manipulate sound and light at the Saacthi & Saatchi New Directors’ Showcase 2012 for MEET YOUR CREATOR.


In 2013, Lopatin signed with Warp Records. His label debut, R Plus Seven, was released September 30, 2013. He also is responsible for writing the score of the movie The Bling Ring together with Brian Reitzell. Additionally, two of his songs appear on the movie's soundtrack, them being Ouroboros (credited as Oneohtrix Point Never, previously released on Returnal) and Bling Ring Suite (credited as Brian Reitzell and Daniel Lopatin).
About | Advertise | Contact | FAQs | Terms of Use | Privacy Policy | Accessibility Policy © 2021 - TheUntz.com. All rights reserved.