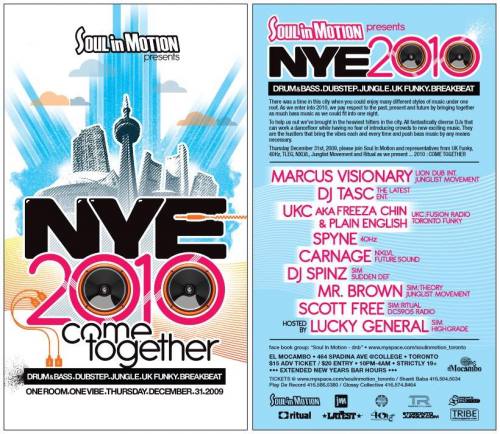 There was a time in this city when you could enjoy many different styles of music under one roof. As we enter into 2010, we pay respect to the past, present and future by bringing together as much bass music as we could fit into one night.
To help us out we’ve brought in the heaviest hitters in the city. All fantastically diverse DJs that can work a dancefloor while having no fear of introducing crowds to new exciting music. They are the hustlers that bring the vibes each and every time and push bass music by any means necessary.
So on Thursday December 31st, 2009, please join Soul In Motion and representatives from UK Funky, 40Hz, TLEG, NXLVL, Junglist Movement and Ritual as we present ...
2010 : COME TOGETHER
MARCUS VISIONARY
Lion Dub International : Junglist Movement
A fixture in this city since the dawn of "rave" he is now one of the most established dj/producer/promoters in the country. Host of the number one radio show in Canada, "The Prophecy" and currently at #1 on the Juno charts with "The Carib EP" he pushes his sound like no other.
DJ TASC
TLEG
His two time #1 DMC ranking is well known in turntablist circles, but he's lightyears beyond that. A regular playing everywhere from the most underground jam to high profile celebrity events, Tasc delivers for any dance floor at any given time. Constantly staying on top of all musical styles, cuttin', skratchin' and mixing it up like no one can.
UKC
aka FREEZA CHIN & MC PLAIN ENGLISH
UKC : Fusion Radio : Toronto Funky
They are the leaders of the UK Funky movement in Toronto, inspired with a new kind of energy and vibe injected into their sets. With the emotion of UK garage and 2-step infused with the rhythms of house and soca music, UKC are showing why they are one of the hottest musical talents that Toronto has to offer.
SPYNE
40Hz
In a short time 40Hz has made a huge impact on Toronto's dubstep scene. Attention to sound quality, top notch headliners and rammed dancehalls is the way they roll. At the center is co-founder Spyne who found his niche diving deep into the dubbed out world of melodic hard edged dubstep riddims.
CARNAGE
NXLVL : Future Sound
In the past 5 years Carnage has gone from being new kid on the block to one of the most successful promoters in the GTA with an outstanding list of talent he has had a hand in bringing to the masses. His style has continually evolved over the years to encompass a wide variety of DnB from deeper liquid vibes to the biggest party smashers.
DJ SPINZ
Soul In Motion : Sudden Def : Def:Inition
Few Canadian DJs can say they've been nominated for a Juno or an MMVA award or opened for bands like Kid Rock and The Beastie Boys. Even fewer Canadians have played in England alongside Legends like Randall and Bailey. With residencies in both Canada and The UK, Dj Spinz boasts many of these distinct honours.
Mr. BROWN
Soul in Motion : Theory : Junglist Movement
As founder of Soul In Motion, his vision has always been to open party goer's minds to something new, whether in the form of talent from abroad or homegrown. Being resident for Theory, Junglist Movement and SIM has placed him alongside most of the biggest names in the industry including Grooverider, LTJ Bukem and Fabio. Expect 100% pure jungle vibes.
SCOTT FREE
Soul in Motion : Ritual : DCS905 Radio
Scott has always taken the road less traveled as a DJ who finds himself ahead of the curve when it comes to shifts in the sounds of the genre. This year Scott began Ritual, a promotion company devoted to bring in heavier acts from across the globe. As a host for DCS905 radio he continues the mission of bringing the city the most cutting edge drum and bass.
LUCKY GENERAL
Highgrade : Soul in Motion : Dubslingers
Lucks has been a long time staple in the Toronto Jungle community. For many years he's hosted some of the biggest jams, not to mention alongside some A list talent. He and his Highgrade crew throw some of the most diverse jams and always with big vibez! He's also been a part of the SIM fam for some time now, and its fitting that we have him on board to help ring in the new year!
About | Advertise | Contact | FAQs | Terms of Use | Privacy Policy | Accessibility Policy © 2022 - TheUntz.com. All rights reserved.