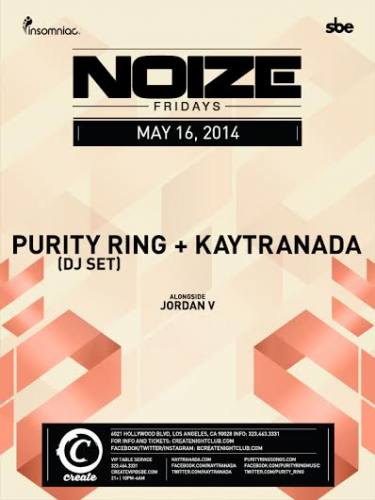 
Corin & Megan grew up in and around Edmonton, Alberta where they were an integral part of that city's small, tight-knit all-ages DIY music community. They toured extensively together in the band Gobble Gobble (now Born Gold), with Corin on drums and Megan singing. In the midst of a six-month-long tour, Corin's love of R&B and hip-hop grew, and he began experimenting with beat-making in Ableton Live. He asked Megan to lay down vocals on a song called 'Ungirthed', and Purity Ring was born. The song made its way online in January of 2011 to immediate international acclaim, and thus the two were suddenly faced with the daunting task of turning a studio project into a real band. To meet the challenge, Megan and Corin spent nearly 6 months conceiving of a live show that could do justice to the unique music they were recording.


Born in Haiti and raised in the city of Montreal, Canadian artist Kaytranada has experienced an explosive rise in the past couple of years with his irresistible production and live sets, but the hard work and success did not happen over night. Before touring the globe and amassing millions of hits online with his series of beloved tracks and mixes, the young man came up as a true disciple, absorbing hip hop and RnB culture since his childhood and finding ways to make the music his own.


Since the age of fourteen, when he first began to DJ and the following year when his brother introduced him to music production software, his output has been relentless. As he explains, “after he showed me the basics, from that day on I couldn’t stop making beats,” pumping out a beat a day for the next couple of years and soon after self-releasing a series of EPs and beat tapes that quickly began to expand his reach. Official releases on HW&W and Jakarta Records soon spread his name like wildfire and some instant-classic remixes by the likes of Missy Elliot, Janet Jackson, TLC, Danny Brown and others have cemented his reputation and his sound; an undeniable swing of the drums comparable to Dilla’s, a signature soulful touch in the melodies, and a healthy dose of funky bass lines.