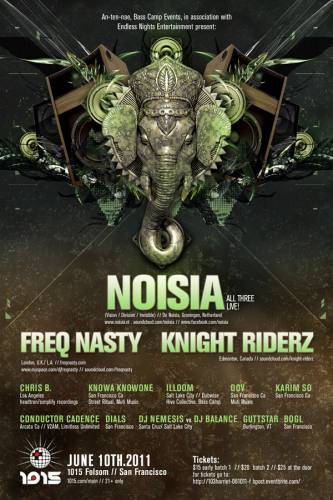 What: NOISIA, FREQ NASTY, KNIGHT RIDERZ and MANY MORE!!!


- All three members on this tour!


NOISIA (who took their name from the word ‘VISION’ inverted on an upside down VHS tape) are Nik Roos, Thijs de Vlieger and Martijn van Sonderen, hailing from the Netherlands. Influenced by an eclectic range of artists, from The Prodigy to James Brown, Miles Davis to Konflict, Noisia make music for DJs and dance-floors that is interesting enough to cross over from the clubs to your MP3 player.2005 saw Noisia establish their own label, Vision Recordings to put out their drum&bass productions and collaborations and retain creative control of their music. Nik designs almost all of the artwork for the releases on their labels, and the guys love the challenges and rewards that come with running a label. Vision Recording’s biggest releases to date have been ‘The Tide’, ‘Exodus’ Feat. KRS One and ‘Stigma’. In 2007 they established Division, a non-D&B label for electro, breaks and house.


Over the past few years, accolades for Noisia have included ‘Best Producers’ at the Dutch D&B Awards in 2006 and 2007, Knowledge Mag Top 20 Tunes of the Decade 2000 – 2009: No 4 with ‘The Tide’, ‘Best Tech DJ’ in the UK National D&B Awards in 2009 and ‘Best Drum&Bass Artist’ on Beatport. The guys have worked with, and remixed a number of artists, with notable tracks including, ‘Alice’ by Moby, ‘Omen’ by The Prodigy and more recently, Foreign Beggars, Amon Tobin with whom they have collaborated on their forthcoming debut album and Hadouken whose entire new record ‘For The Masses’ they produced.


Their DJ schedule is tiring even to look at, they have played in major cities all over the world, from Sydney to Moscow, Tokyo to Berlin and have DJ’d in some of the world’s biggest clubs. Their track ‘Groundhog’ is featured twice on DJ Hero, a game which has been an international success, ‘Stigma’ was used on the game Gran Turismo and ‘Machine Gun’, the first single off the new album, features in the game WipeOut.


2010 is an exciting year for Noisia, they start a new imprint called Invisible which will cater for deeper and more experimental drum&bass releases, produced by themselves and other artists and sees the release of their debut album ‘Split The Atom’ which features a wide variety of styles and genres from electro to drum&bass. 2010 will also be the year Noisia explore the LIVE direction of their music, challenge themselves and push their musical style whilst continuing to make the ‘bangers’ they are known and loved for!


A glitch hop, breakbeat, dub, and electronica producer FreQ Nasty, was born in Fiji and raised in New Zealand. As a breakbeat pioneer Freq Nasty is widely-acknowledged by critics for consistently breaking boundaries with his music, from his classic breaks tunes such as "Boomin Back Atcha" and "Move Back," to remixes of pop icons like Fatboy Slim, Kelis and KRS-One. At the same time, Freq is receptive to all that surrounds him; for example, his move to London and immersion in its developing scenes in the 80s resulted in seminal releases on Botchit & Scarper. Forward thinking and progressive, his releases evidenced a sign of the fast-moving times.


These days, FreQ Nasty is staying one step ahead of the ongoing, hype-fueled evolution of electronic music with his contributions to the Futurestep sound. The recently released FABRICLIVE.42 mix album is evidence of this shapeshifting sound: with it, Freq takes on the bass heavy stomp of L-Vis 1990's UK take on Baltimore house, the blistering shatter of TRG, and several of his own storming productions, including Creator, a co-production with Switch on a Santogold tune released in 2007. Freq also collaborated with San Francisco-based Heavyweight Dub Champion, remixing the group's Snared tune, in support of The World Family's creation of an irrigation system in the village of Gara Dima, Ethiopia and Michael Franti, remixing Franti's "The Future", in support of a Bay Area nonprofit to help create a music studio for at-risk youth.


Canada based duo known as Knight Riderz are producing lazer bass bombs in a 12 dimensional world of twisted low frequency induced hip-hop. Releases forthcoming and already out on ESL, Muti Music, True Movement, Seclusiasis, Made In Glitch, Formation UK, and remixes for Thunderball, Freestylers, South Rakkas, Kush Arora, Love & Light, and King Fantastic illustrate only a small fraction of what is in store from the Riderz. Their original work with MC's Zulu and Juakali define their style with lazer like buzz saw synth work surrounding a thunderous vocal vibe or beautifully intricate melody. Fully equipped with a deadly live performance Knight Riderz are bangin bassbins world wide in 2011.


Since their inception, Knight Riderz have gained recognition fast with support from the likes of FreQ Nasty, ill.Gates, Dov and An-ten-nae all supporting their tunes. Not to mention booking agencies chasing them down as well as some hot mashups and releases and remixes already out / coming out on Muti Music, Formation Records, True Movement, ESL, Made In Glitch and Diplo’s Mad Decent Recordings. Knight Riderz have been making some serious moves in a very short amount of time. This release has all the fixings for greatness, and it definitely delivers.


There will be a Yoga workshop lead by the Yoga of Bass himself,


Come early to join FreQ and prepare yourself for the night of unbelievable music that follows.


In this workshop Darin (FreQ) will give personal and musical examples from his live and career along with discussion on how Yoga texts explain these experiences and their effects on the inner body... and how a yogic and spiritual practice can help you bring this feeling of love, unity and connectedness off the dancefloor and into your life.


Darin has been practicing yoga for 12 years. He have studied the great texts of Yoga and Buddhism with his teacher Venerable Sumati Marut (www.lamamarut.org) and the Yoga Studies Institute.