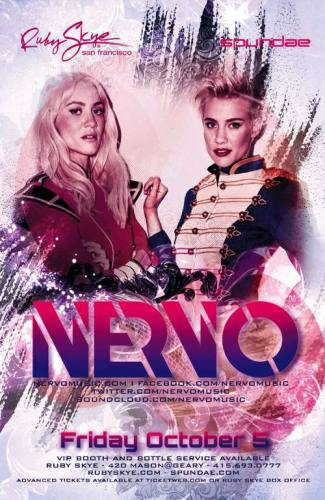 NERVO are sisters Mim and Liv Nervo. Throughout 2011 these multi-talented Australian DJs began to make serious noise in the Dance world. They are also hit songwriters, producers and artists in their own right.

NERVO have spent much of the last two years touring the world and climbing the ranks to become one of the hottest DJ duos on the circuit. They have built up a big profile in the U.S. having opened up for Britney Spears and Nicki Minaj on the Femme Fatale tour plus DJ dates at big Electronic Dance Music festivals such as Electric Daisy, Lollapalooza, Tommorowland, Ultra, and Winter Music Conference.

The girls have recently confirmed a DJ residency in the new mecca for Dance music, Las Vegas, at the Wynn Hotel Group. Additionally they have spent a lot of time in Ibiza this year with DJ dates at I.M.S, FMIF and Pete Tong’s Pure Pacha closing night.

The talent doesn't stop with their DJing. As songwriters NERVO have been busy behind the scenes for years with their great sense of melody and clever lyrics. They have penned hits for such artists as Ke$ha, Kylie Minogue, The Pussycat Dolls, Jennifer Hudson and Nicole Scherzinger. Their big break-through as songwriters came when they co-wrote Guetta's world-wide smash When Love Takes Over featuring Kelly Rowland, which charted at #1 in 11 countries across the globe and won a Grammy.

As artists in their own right NERVO recently celebrated their first Beatport #1 song with the official Tomorrowland Festival anthem “The Way We See The World”which they co-wrote and co-produced with Afrojack, Dimitri Vegas and Like Mike. “The Way We See The World” joins the growing list of NERVO club hits which includes 2010‟s “This Kind Of Love” and “Irresistible” both featuring vocalist Ollie James, illustrating their rising status as producers.

Now NERVO are preparing for the UK release of their new single “We’re All No One” which sees them finally step up to the mic as singers. The single features DJ‟s Steve Aoki and Afrojack. There will be a remix package with versions from Hook N Sling, Jungle Fiction, Dave Aude, Autoerotique, plus a NERVO „Goes To Paris Remix‟ from the girls themselves. In the US, the song has already reached #8 on the Billboard Club Chart, and was in rotation on multiple MTV outlets including MTV Buzzworthy, MTV Hits and MTV Tres.

The video for “We’re All No One” has already had over 2.5 Million views. It can be viewed here…. http://www.youtube.com/watch?v=pyeClGsiT4U

In the US, NERVO recently launched a monthly DJ mix show NERVO Nation on Sirius XM's BPM Channel 51, which airs the third Saturday of every month at 10 p.m. EST. As presenters, curators and DJs, Mim and Liv will preview new NERVO music, spin current dancefloor favorites, highlight a mash-up of the month, and conduct special one-on-one guest chats with such luminaries as Armin van Buuren, Nadia Ali and Michael Woods.