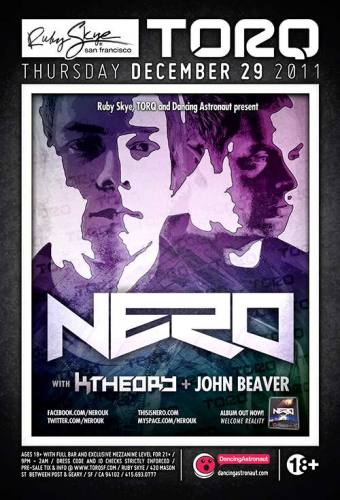 
NERO are a drum and bass and dubstep duo from London, UK consisting of Dan Stephens and Joe Ray. Alana Watson provides vocals on many of the duo's songs. On 6 December 2010, Nero were announced as nominees for the BBC's Sound of 2011 poll.

Best known for their drum and bass and dubstep tracks. Nero's debut release was This Way in 2008. They won the 2010 Beatport awards for Best Dubstep Act and Best Dubstep Track for Act Like You Know in 2009. Nero are working on their debut album signed to MTA Records, owned by Chase and Status.

Sasha Frere-Jones, Journalist for the New Yorker Magazine, listed Nero's remix of The Streets, Blinded By the Lights in his top songs of 2009. The track had radio airplay in the UK as well as a being played by DJ's including Chase and Status, Skream, Tiësto and Diplo. More recently Nero have remixed La Roux, deadmau5, N* E* R* D and Daft Punk.


The duo released their first official single Innocence in the United Kingdom on 26 April 2010. The single was released as a double A-side with the track Electron as a digital download, as well as a vinyl. The track managed to reach a peak of number 168 on the UK Singles Chart besides peaking at number 16 and 11 on the dance and independent charts.

The nomination was followed by the addition of their second official single Me & You to BBC Radio 1's A List playlist on 8 December 2010. The single was released in the UK as both a digital download and a 12 vinyl on 2 January 2011, where it debuted at number 15 on the singles chart, also managing to reach the number-one spot on the independent-releases chart.