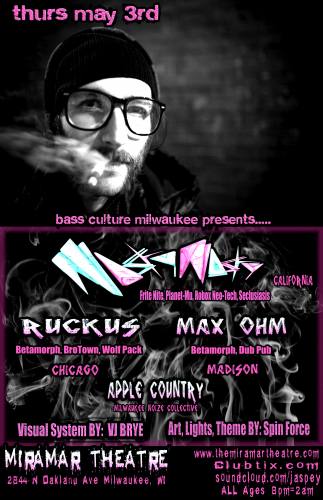 California\'s NastyNasty can best be described as a sonic fetishist. From his first single on San Franciscos Frite Nite imprint to his most recent release on the prestigious Planet Mu label he\'s established his own abstract take on contemporary bass music and defined himself as one of North Americas most unique producers. A heavy helping of heartfelt vocal trickery and melodic sensibility accompany heavy drums and brow-raising bass sounds to construct songs that both stand as listening pieces as well dance-floor wizardry.Producing for nearly a decade under different aliases, he\'s shared the stage with a diverse selection of acts including; Joker, Ludacris, Richard Devine, Starkey, Megasoid, Slugabed and more. 2010 saw NastyNasty tirelessly touring North America, putting up a-grade remixes and releasing his first e.p. "Puke Paint" on Frite Nite. In 2011 He\'s taking his live sets international, releasing music with UK\'s Planet Mu and Berlin based label Robox Neo-Tech and getting down to work on a full length album.

Huge summer festivals? Check. Massive sold out shows? Check. Faces melted across the USA? Check. Being one of Chicago biggest Dubslingers for years now? Check. Ruckus has been a busy man this year. As many of you may know, Ruckus started as a drum and bass DJ. In early 2008 the pulsating sounds of dubstep grabbed a hold of him with no turning back since.

What\'s next for this multi talented man? Be on the look out for more insane events with an ever growing crowd of fans. As a new generation of bass monsters arise and come to dominance and Ruckus will be right there at the top, maintaining a "semi-professional" approach while still partying with the best of them.

A staple in Madison and the Midwest E.D.M. scenes for well over a decade, Max has taken his vast experience and talent of being a great house dj, and slid it seamlessly to the newly emerging sounds of dubstep. Behind the one\'s and two\'s, his knowledge of beat structure and flawless mixing can be felt accross the dancefloor. As a producer, Max blends the best of both worlds, giving his listeners the "percussive" feeling of house, and transposing it into the rich, thick bass rides and rhythms of dubstep. Look for his release on Betamorph with Teksteppa (UK) for a truly unique and tastefully pleasing sound.

UK FUNKY/BASS/Techno-BASS on this night

Not content to just be another dj, AC is on the path to show what he\'s learned over 10 years of analyzing the Pros and going to the clubs, venues, and parties that have housed them and not afraid to express his opinion.

Obsessed with the flow, the choice jams, and being as ahead of the game in new songs as possible, you will be wowed with the energy created from this man.

Spinning began at the very start of 2008.

Naturally a music and control freak....DJing was fate.

With a best friend in Devin aka CockDiesel, started the Milwaukee Noize Collective in April of 2009.