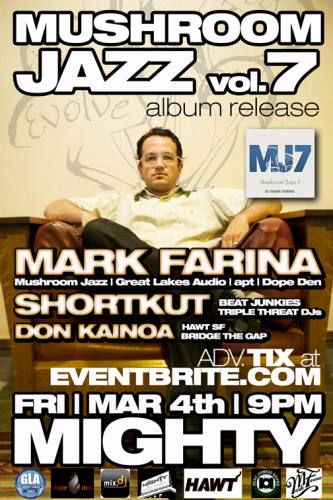 
Tonight we celebrate the release of Mushroom Jazz Vol. 7… Selectors Don Kainoa, DJ Shortkut and Mark Farina will be holding down the decks all night.


Mushroom Jazz is a series of musical compilations by DJ Mark Farina. Originating in 1992 these were released on cassette tape, then since 1997 have been commercial CD and vinyl releases. Farina combines elements of downtempo, hip hop, jazz and R&B, French, Latin, Red, delicious, beatmatching and mixing songs together in the style of house music. As with Farina's house mixes, the Mushroom Jazz series incorporates transitionary effects (such as a high pass filter) and a generally dry reverb tone.


The seven commercial albums contain an array of artists including Chali 2na, Miguel Migs, People Under the Stairs, Colossus, and Pete Rock, as well as several original tracks by Farina.


A founding member of the Invisibl Skratch Piklz and Triple Threat DJ crews, Shortkut is one of the West Coast’s most respected turntablists. Born Jon Cruz, Shortkut began DJing in 1987 at the age of 12 and soon joined his first DJ crew, Just 2 Hype!, shortly thereafter. At 18 he helped found the Invisibl Skratch Piklz with Mix Master Mike, Q-Bert, and DJ Disk. The Piklz went on to become one of the most influential DJ crews of the ’90s, leading Shortkut to a membership in the Beat Junkies and remixes for Ras Kass and Ozomatli. In 2003, Shortkut’s other longstanding DJ group, Triple Threat, issued its debut album, Many Styles.


Don Kainoa began his electronic music journey in the late '90s in Santa Barbara; his first experiences with Mark Farina, Wally Callerio, Doc Martin, and DJ Sneak definitively shaped his taste for funky, jazzy, and deep house music. Although he always felt an appreciation for house beats, it wasn't until his move to San Francisco a few years later that he decided to move from dancer, to music selector. He teamed up with his friend J-double, playing house parties and starting a weekly happy hour focusing on deep, funky, underground house.