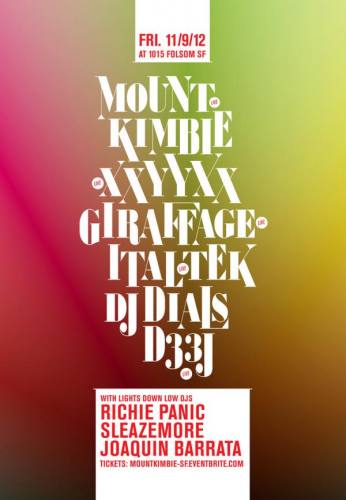 Mount Kimbie are Dominic Maker and Kai Campos who met at university in 2008 and began making music together in a home studio in Peckham.


The duo have developed a truly unique sound whose experimental rhythms lend themselves to the fringes of dubstep, wonky and hip hop, but ooze with emotion and echoing ambient soundscapes that take the listener to an entirely different place.


Their EPs, released on Hotflush Recordings, have already been well received, with support from pioneering DJs including Mary Anne Hobbs, Scuba, Rob Booth and Ramadanman


Their debut album Crooks & Lovers was released on Hotflush in July 2010 and was met with critical acclaim.

XXYYXX is the name of Orlando, FL’s upcoming beat producer, Marcel Everett. He’s been compared to James Blake, J Dilla, and Star Slinger. Marcel works out of his own bedroom studio and creates beats as his main focus. His music has been featured on XLR8R, Earmilk, and Indie Shuffle. Now he is creating harmonious music that provokes emotion and transmits vivid images of peace and still sadness.


Marcel Everett is constantly changing his style. Marcel is heavily influenced by 80s new wave and r&b, maintaining interest in vinyl and old cassette collections. He's likened to How to Dress Well, Toro y Moi, and Washed Out.


iTAL tEK's debut album 'Cyclical' was released on Planet Mu records in May 2008, since he has been working on new material and released Massive Error EP in May 2009.


October 2009 also marks the launch of iTAL tEK's own label Atom River, used as a vehicle to independently release his own music, starting with 'Mako EP'.


Ital Tek's new album is really quite different from his previous releases. Alan Myson is entering a new phase, of which last year’s Gonga EP was the first step. The music here works at higher speeds than the dubstep and hip hop tempos he has used in the past, and explores more fully the dynamic tensions between space and detail, melody and atmospheric sound than his previous releases.