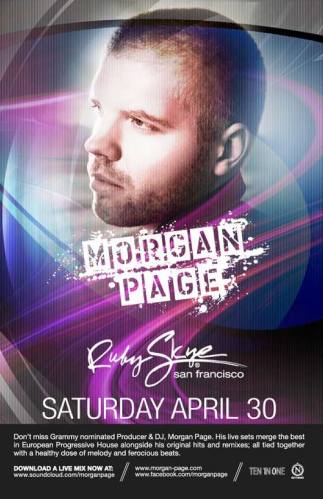 GRAMMY-nominated Remixer and world-renowned DJ/Producer, MORGAN PAGEhas emerged as one of the top rising talents of Electronic music.

The hotly sought after Producer and Remixer - whose recent remixes include tracks for Adam Lambert, La Roux, Madonna, and Katy Perry  - has developed a style all his own, merging punchy beats with strong melodies and song structure that connects with dance music veterans and newcomers alike.

Page’s latest single, “I’ve Had Friends,” co-produced by Dave Dresden and featuring vocals by Jan Burton - best known for his work with Gabriel & Dresden. “I’ve Had Friends” takes a more aggressive turn than previous singles from Page’s 2010 album release, Believe. The track focuses on raw male vocals and forceful, driving synths. On remix duty we see Grammy-nominated German producer Jean Elan take the reigns for a smashing big room remix that will certainly deliver the goods, a tough glidey electro-infused affair by Andy Caldwell, and a haunting indie mix by Cicada featuring additional guitars and vocals that take the original to new heights. Page’s previous singles from Believe - “Fight For You” and “Strange Condition” - have each reached the Billboard Dance Chart.

Morgan’s productions, along with a steady international touring schedule have made him a coveted DJ on a global scale. Having toured S. America, Australia, and practically every major US city in 2008, Morgan’s relentless DJ schedule has brought his unique show to tens of thousands of eager fans. Morgan’s custom DJ rig allows him to create improvised remixes on the fly, while showcasing his own remixes and original works alongside hits by his favorite producers.

With a number of major award nominations, a new single, and a highly anticipated follow-up album coming in 2011, you can expect there will a lot of interest in the year ahead from this rising star.