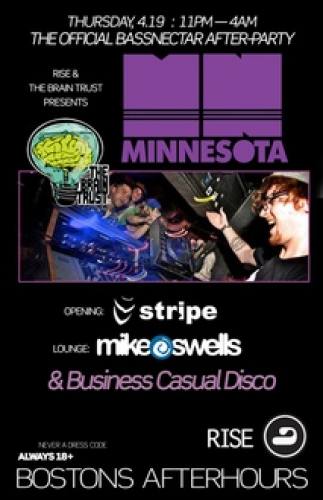 
According to Minnesota, “My goal is to make bass heavy dubstep/glitch hop music that’ll get you dancing, but it is not the same old three note transformer step. I try to focus more on the melodic side of dubstep, and hopefully, make quality songwriting a more relevant factor in the genre.” He's already a staple on the festival circuit, having played at Emissions Campout in California, Electric Forrest in Michigan, Snowball in Colorado, and Snowmont in Vermont. He's also toured as a supporting act for Big Gigantic


Minnesota’s first EP, “ Panda Snatching Tycoon”, was released on Tycho Records in January 2011 and has found critical acclaim since then. His next official release came from Mal Label and was titled “Ancient Machines”. “Ancient Machines” was number nine on the addictech.com best seller’s list for the year, and every track from the album charted on the beatport.com glitch hop charts. During this time, Minnesota also managed to put out a free EP with Martyparty called “Ultraviolet Halo” which was released in July 2011. This just proved that Minnesota shows no signs of slowing down as an artist.


“Big room, melodic bangers,” is how Minnesota describes his next EP. “It will also have some faster tempo hip hop influenced stuff on it.”


In terms of production, Minnesota’s tracks represent major influence from song writers that have gained his admiration. Other artists such as Mimosa, Martyparty, Modeselector, have truly had an impact on his production and success. Yet, it is impossible to undermine the value of some of his personal favorite artists such as Bassnectar and PANTyRAID throwing his tracks down during their sets.


“Quickly becoming a staple in my sets,” commented Bassnectar when discussing the use of Minnesota’s track “Push It”. “Perfect for when I need a track that is epic and churning but also melodically hyped.”


Minnesota’s goal seems simple; to release diverse productions that can win over any crowd. Lets get a taste for it @ RISE on Thursday, 4/19, after Bassnectar destroys the House of Blues.