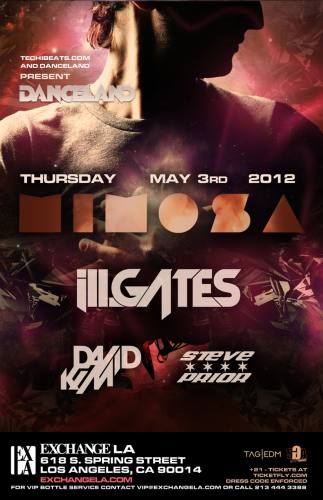 Techibeats.com teams up with Danceland to give Los Angeles a 21+ Thursday night event like non other. This is taking place at Exchange LA Thursday, May 3rd. The headliner Mimosa will be bringing his unique style and sound to all the club goers dancing feet. This event is in high demand and we highly recommend you get presale tickets here: http://www.ticketfly.com/event/117443

A little bit more about our talent…

**Mimosa** Blissfully unconcerned with a world obsessed with categorization as a means of definition, MiM0SA crafts music for its own sake, defying expectations with genre bending soundscapes. Hailing from the San Francisco Bay Area and currently residing in Los Angeles, MiM0SA began producing at the tender age of 17. Blessed with an abundance of talent and an ear for sonic experimentation, this fan-favorite has quickly developed a name for himself as one of the West Coast’s top exports. In just a few short years he’s shared the stage with standard-bearers like Benga, Skream, Rusko, Datsik, Glitch Mob, Pretty Lights, Bassnectar and Flying Lotus. He’s also played festivals and shows across North America, including Coachella, Symbiosis Gathering, Burning Man, Decibel Festival, and Red Rocks Amphitheatre. To say that MiM0SA is on the rise is to miss the mark. Rather, MiM0SA has arrived.

**Ill.Gates** Toronto-born, San Francisco-based producer, performer and educator ill.Gates has had a long and lavish career in music. DJ’ing since his earliest teenaged years, .Gates has established a global fan base and enjoys an increasing reputation as dynamic, definitive and decisive EDM artist. ill.Gates is rising steadily up the ranks through his many collaborate releases with such industry heavyweights as Datsik, Bassnectar, Ana Sia, Opiuo, T.O.B., Vibesquad, Mimosa and more. Crushing charts and detonating dance floors with such colossal collaborative tracks as the Bassnectar timestretch and Divergent Spectrum releases, ill.Gates receives extensive amounts of appreciation and praise from some of the leading artists in the electronic music setting.

**Steve Prior** Steve Prior enters the room and the restless crowd is hungry with anticipation-- they’ve waited deep into the night for his signature extended set and won’t leave until satisfied. The room is overflowing with scenesters, fashionistas, hipsters, house junkies and people who just love good music. For Prior, the music isn’t about other DJ’s or outside influences… it’s about crafting the ultimate experience, the defining moments you remember losing yourself to for years to come. He strives for mutual action and reaction in every set, and this approach works beautifully - he is one with the audience, and his audience is one with the music.

**David Kim*** David “DK” Kim was born in San Jose, California. The son of Korean immigrants that came to the U.S. in search of the American dream. He has lived most of his life in Los Angeles, where he completed his high school education at Beverly High. He began his music career in 2009 at the remarkable age of 18, initially performing at Mansion parties in the Hollywood Hills and Malibu. Six months later he found that his true passion was in producing. During that same time he became an intern and started cutting his teeth as an opening act for DECKSTAR. Later that year he was hired to become the official DJ for Universal/Motown artists, SWEET RUSH he’s also worked with B. Howard, Colette Car, StunnaMan from the Pac. His music transcends the traditional sounds of House, Techno, and Electro. His musical influences can be heard in his music and include; Sander van Doorn, Laidback Luke, and Tiesto. David’s sudden ascent through the music industry has made him one of the most talked about young DJ’s and Producers in the world of dance music.