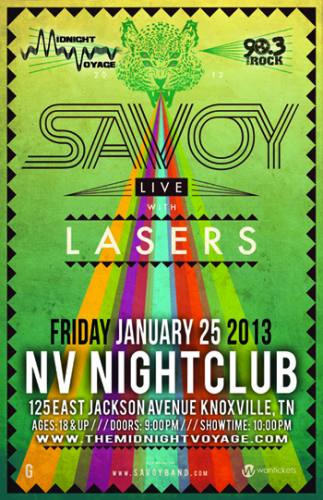 presented by Midnight Voyage and 90.3 The Rock

Make sure you bring your valid, state-issued photo ID!

Grounded in their own distinctively powerful brand of electro, Boulder, Colorado’s SAVoY bridges the gap between high-quality studio production and dominating live performances. The trio has performed live at multiple major music festivals including Monolith Music Festival and Wakarusa. Over the past two years, they have shared the stage with top touring acts including Phoenix, Sound Tribe Sector 9, The Glitch Mob, Pretty Lights, Chromeo, and Passion Pit, to name a few. After selling-out multiple venues in their home state, some argue that it’s the band’s unique lineup– featuring two DJs (Gray Smith and Ben Eberdt) and a live drummer (Mike Kelly)–that distinguishes SAVOY from other acts. Others say it’s the fact that their music moves effortlessly between the sounds of rock, pop, funk, French house, German minimal techno, world music, and many of the other genres in between. Regardless of opinion, the fact is that SAVOY continues to draw mass appeal as they bring their rock-show attitude and dance floor tactics to the coast-to-coast venues that host their hoards of anxious fans.
About | Advertise | Contact | FAQs | Terms of Use | Privacy Policy | Accessibility Policy © 2022 - TheUntz.com. All rights reserved.