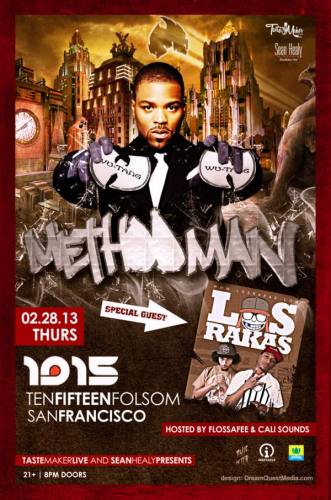 Method Man (Clifford Smith) was born in Staten Island, New York on April 1, 1971. He split his childhood years between Staten Island and Long Island with his separated mother and father respectively. His father was the one that introduced him to music and poetry but Method Man’s early years were spent working odd jobs and being a petty drug dealer. He continued to work on his art and in the early 1990s teamed up with his future Wu-Tang cohorts RZA, Genius/GZA, and Ol’ Dirty Bastard in Staten Island.

By 1993 Wu-Tang Clan was put on the map with their debut album “Enter the Wu-Tang (36 Chambers)”. The group had the option to pursue solo interests at the same time as working on Wu-Tang material and Method Man was the first to put out a solo album. Having signed with the legendary rap label Def Jam, Meth released “Tical” in 1994. The album really blew up and went platinum. He was also working with other hip-hop and R&B artists at the time, and his duet “I’ll Be There For You/You’re All I Need” with Mary J Blige was another huge success and went on to win him a Grammy. In 1997 he was back in the studio with his crew, releasing “Wu-Tang Forever”.

His second solo album, “Tical 2000: Judgement Day” was released in 1998 and featured numerous guest spots by Wu-Tang members and other stars like D’Angelo, Chris Rock, Mobb Deep and Redman. Througout the years, Method Man had built up a close relationship with Redman and the two would go on to collaborate on a lot of music and even a movie. In 1999 they released the album “Blackout!” which featured their collaborative musical works.

Between 2000-2004, Meth did not release any solo albums but instead concentrated on his acting career and Wu-Tang related projects. He appeared on the big screen in several movies including How High, Scary Movie 3, My Baby’s Daddy and Soul Plane. In 2004, him and Redman even had a sitcom together on Fox called “Method & Red”. It was suppsed to be a successor to Will Smith’s “The Fresh Prince of Bel-Air” but was cancelled nine episodes into its first season. He also worked on three Wu-Tang Clan related initiatives, with the group releasing “The W” in 2000, “Iron Flag” in 2001 and a live album, “Disciples of the 36 Chambers: Chapter 1” in 2004 which did not include Method Man as he was filming a movie.

On the solo front, Method Man aka Johnny Blaze released his third album in 2004. “Tical 0: The Prequel” was a bit of a bust with the critics as it featured many pop rap stars like Missy Elliot, P. Diddy and Ludacris - but it still managed to go gold. In August of 2006, Meth is supposed to release his latest album “4:21: The Day After”.