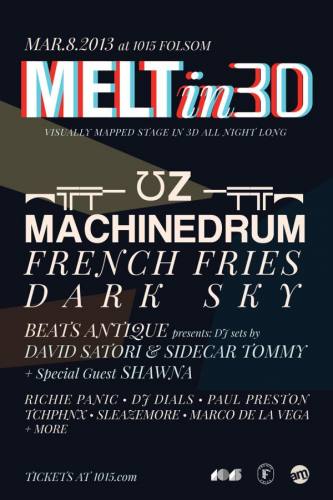 Travis Stewart is better known as Machinedrum, formerly known as Syndrone, and is one half of Sepalcure. At 19 he released his debut Now You Know on Merck Records was heralded as the “standard to which the next wave of imitators aspires” by Pitchfork. They weren’t wrong.

An early influence on the label, we got to meet Travis at the heart of ‘New-New York’ – spending nights running his Cassette club and working through the day in studio with Jesse Boykins iii, Theophilus London, Addiquit & Azealia Banks. A role call that meant little in 2009 that are now helping define rap and rnb in 2012. Travis is now residing in Berlin to tour and support the music he’s become known for: the heady instrumental fusion of hip hop, juke, jungle and house.

On his first release with us, Many Faces, we stamped two polar sides of innovative club music – crisp sparkling hip hop, with a flipside of ghetto house and juke. No to mention an acid-drenched remix by our mello Bok Bok. In 2011, Machinedrum released a Sepalcure album on Hotflush, a Boiler Room anthem in the form of Alarmaa – the stand out dubplate on Jackmaster’s Fabric 57 Compilation (we pressed up 500 limited vinyl along with his other Bootleg’s of The Dream, Madonna & Weezy’s daughter. The Alarmaa 12″ flew in a matter of days from the warehouse). Travis also released the critically acclaimed full length Room(s) on Planet Mu which included artwork by LuckyUs right here. 2011 truly was a meteoric year for ‘Drum with releases rightfully placing him in the top ranks of this new fusion dance music.

The mysterious ƱZ came up on the soundcloud scene about 8 months ago, with the amazing ŤɌ∆Ҏ ᶊῌῗ† series.

With huge support from DJ’s worldwide, the likes of Diplo, Flosstradamus, JWLS, Toddla T, Baauer, and Craze to name a few, UZ’s debut EP was released on Jeffree’s, a sub-label to Mad Decent.

Raw and powerful, but with a laid back tempo, UZ gives listeners a chance to slow down without losing momentum.

Native to South America, living in the south of Paris, inspired by southern rap, French Fries developed his own version of club music.

Resident DJ at 14, first release at 16, first hit at 18 with the worldwide acclaimed “Arma” EP, the now 20 year old kid, co-­?founder of ClekClekBoom Recordings keeps working hard. Late in 2011, he released his “Champagne / Hugz” EP on his own label that had been charted in the Beatport Top10, while putting the finishing touches to his “Yo Vogue” EP out on Dirty Bird in March 2012.

Sharing his time between his studio, his office and touring all around the world, he’s more focused than ever, installing a solid base for a long lasting career. Be ready for some Paris Club Music soon!

Tom, Matt and Carlo together make up the London based production and DJ unit Dark Sky. Having met at music college, Dark Sky formed in 2008 out of a mutual love for the ever evolving London electronic music scene, a love that the trio have always reflected through not only their DJ sets but also their productions, drawing influences from original UK garage through to house, via drum & bass and hip hop.

It wasn’t long before their forward thinking outlook on production and DJing got noticed and their debut 12” was picked up by the Bristol imprint Black Acre. The release was met by rave reviews and since then further releases have been signed with consistent success to Pictures Music, Ninja Tune, Blunted Robots and Modeselektor’s 50 Weapons imprint.

“Dark Sky are winning fans by daring to be experimental, diverse and multi-textured but also noisily and thrillingly addictive”

“All things considered, the trajectory of London production trio Dark Sky is a little extraordinary. While most producers exercising within the soupy realm of dubstep, garage, funky and grime have fell victim to swells of hype and criticism as various buzz words and sonic trends zoom in and out of bass music fashion, these guys have stuck to a formula that benefits each song as a whole piece of music, as opposed to just focusing on staple elements reflective of the zeitgeist.”