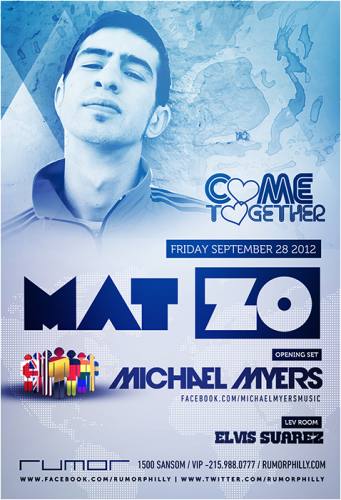 
“This whole genres business is like the Berlin wall, and I’m there with a forklift and a wrecking ball” Mat Zo, London, September 2011


At 21 years of age, Mat Zo is living the dream – part of a new breed of precocious, unrestricted DJ/producers that are making big noises without the one-dimensional genre blinkers of old. In the last 12 months alone, the London based producer has seen his boundary-blurring productions like “Bipolar”, “Superman”, “Mozart” (with Arty) and “Frequency Flyer” dominate the Beatport charts. DJs as varied as the Swedish House Mafia, Tiesto and Above & Beyond hammer them at the biggest events on the planets, while Zo himself spends his time zig-zagging across the planet – rocking the crowds at events like Electric Zoo in New York, Audiotistic in LA, Creamfields Australia and London’s SW4.


As anyone who follows his colourful twitter feed will know, Zo is a ranter as well as a raver. Laid back but full of creative fire, he’s still the music obsessed joker that his mates have always known – but somehow seems like an elder statesman at the same time. As a prodigious teenager, he took both the drum & bass (he records for Hospital as MRSA) and trance scenes by storm. Now armed with a discography of hits that would put some of the longest standing producers to shame, he has gone on to remix pop princess Kylie and become a leading light in both the drum & bass and trance scenes – occasionally topping the Beatport charts in both genres at the same time.


With his French-house influenced remix of Above & Beyond’s “Thing Called Love” getting support from Gallic underground hero Lifelike and “The Bipolar EP” finding its way into the sets of A-Trak, Afrojack, Porter Robinson, Steve Aoki and Roger Sanchez, Zo has proved his chameleon-like capabilities to find fans in whatever sound he turns his hands too.


As he works busily behind the scenes on his debut artist album for Anjunabeats, Zo’s kaleidoscopic creativity is set to be unleashed in full force. With everything from French house to rock-riddled, funk-fuelled electro and hip-hop vibes already planned for the album, Zo’s genre-wrecking visions are set to be realised in the most explosive manner imaginable.