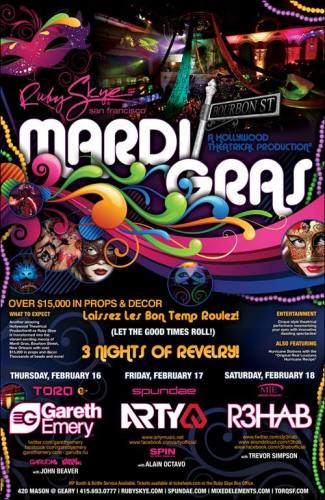 On July 4th, 2011, Arty released his massive, big-room house anthem “Around the World on Anjunabeats following unprecedented support across the board from Axwell, Chuckie, Hardwell, Tiesto, Robbie Rivera, Armin Van Buuren, Above & Beyond, Gareth Emery and an extended list of the biggest names in electronic music of the moment on the biggest events of the year such as the Swedish House Mafia’s performance on the main stage of the record-breaking Electric Daisy Carnival Las Vegas in June 2011. Artem Stolyarov has himself already been around the world and back having played events across the globe from the most prestigious clubs to some of the biggest festivals including Global Gathering, Gatecrasher and ASOT 500 in Den Bosch.

In autumn 2010 Arty made his debut in the DJ Mag Top 100 poll as #78 in the world while being listed by many peers in the same centurion as the breakthrough artist of the year, which was subsequently followed by nomination for Best Breakthrough DJ at the 2011 IDMA awards. As Arty said in an interview in summer 2010, “I think that your goals must be difficult to achieve; reaching such goals is the most exciting thing that encourages me to develop as an artist”, and with so much achieved so far in his fledgling career with over 30 releases on labels from Armada to Black Hole, topping Beatport charts and being supported on countless radio shows by other top artists this hard-working attitude indicates only more to come.

In 2011 alone some of his productions such as the collaboration “Rebound” with Mat Zo have been among the most played tracks around and to add to his already-impressive remixology resumé he has been handpicked for duties on some high-profile release packages to be announced soon. Confirmed for Audiotistic Festival in LA and Electric Zoo Festival in New York as debuts in each city, the 21-year old Russian native continues relentlessly moving forward setting the bar for what constitutes a rookie year in every possible area of his career.