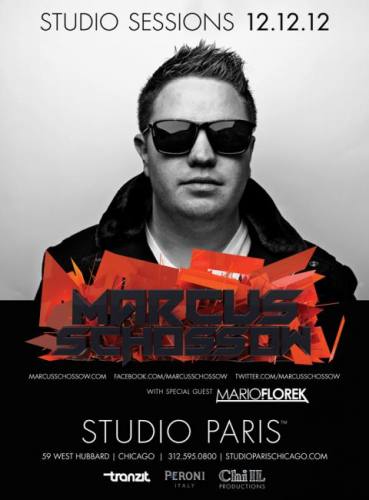 
Schossow is a very rare individual. He shines at whatever he throws his hand to,


and whether that's performing to thousands or producing for the masses he's on a  mission to reinvent dance music. He went off to a flying start being voted as the  number #1 most popular nordic DJ in 2008 and 2009


futuristic techno, with filthy house and a subtle smattering of trance; his sound


automatically became appealing to a whole host of DJ's and music fans alike.


Marcus is the leading head of the nu-trance generation, A new elite set of young


DJ's and producers with dance floors around the world clamoring for his infectious presence and prodigious mixing.


Progresia and Tone Diary, his own projects, are establishing the "Schossow Sound" while his work with fellow producer Thomas Sagstad has seen Tiesto, Axwell and Steve Lawler snapping up tracks like Hypnotizer and Crepusculo. World-renowned Dutch outfit Spinnin have given Schossow their full backing, making him their youngest signing to date. At only 27, Schossow is a serious force to be reckoned with. Further support comes from the A list including Pete Tong, Armin Van Buuren, Tiesto, Steve Angello, John Digweed and Ferry Corsten, underlining Marcus' increasing influence in the world of dance.


And it's not just his ability as a producer that screams "watch this person".


Schossow is in demand around the world! America, Europe, the Far East and


beyond are all calling out for gaps in his diary. In the short time Marcus has been around, he's already clocked up some of the biggest gigs in the calendar: Trance Energy, Dance Valley, Godskitchen, Monster Massive, Mayday, Electric Zoo, Together As One, Ministry Of Sound, Sunrise Festival, Escape Into the Park, Zurich's Street Parade (Playing for 1,3 Million people) and Colours Festival are just some!


With Tone Diary, Marcus' acclaimed radio show which airs on Sirius XM's Electric Area, the sound of Schossow travels even further. Setting the airwaves ablaze, he reaches those not lucky enough to have caught him live yet and reminds those who have of why they'll have to check him out again!