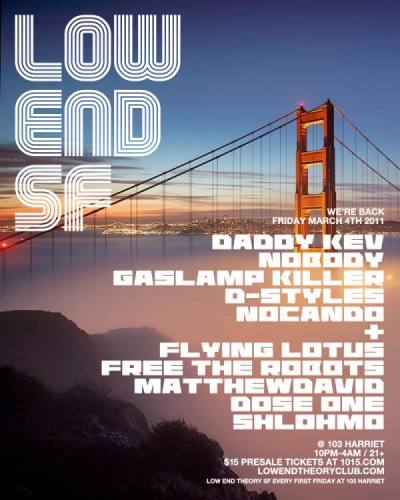 
After a stellar debut of Low End Theory San Francisco in January, the forward-thinking music showcase is back with all residents plus some amazing guests on March 4, 2011 at 103 Harriet.


Brainfeeder label head and musical pioneer Flying Lotus will headline the second installment of Low End Theory San Francisco, shaking off the space dust to bring blunted beats to the energetic crowd. Flying Lotus will be joined by the talented residents of the world-renowned club night: Daddy Kev, D-Styles, Nobody, MC Nocando and The Gaslamp Killer.


Also on the lineup are several notable artists from Los Angeles including Free the Robots and Matthewdavid. Local Bay Area luminaries Shlohmo and Dose One will also perform sets.


“Let me waste no time getting to the point: Low End Theory SF is everything I've wanted a hip-hop/dubstep/bass/beat music/whatever party to be in this city for a long time now.” (SF Weekly)


Known across the globe for supporting visionary artists, promoting breakthrough sounds and nourishing a vibrant artistic community, Los Angeles' Low End Theory is now showcasing its legendary night of left-field music in the Bay. Blending futuristic hip hop with experimental electronic sounds, Low End Theory is a hub of the beat community and a place where creative minds congregate. With an eclectic palette of performers and a diverse audience of beat lovers, Low End Theory is a fresh sonic showcase whose reverberations can be heard around the world.


Low End Theory San Francisco takes place the first Friday of every month at 103 Harriet Street beginning with this show in March. Advance tickets are available now on the 1015.com website here: http://1015.com/events/1015/03-04-11