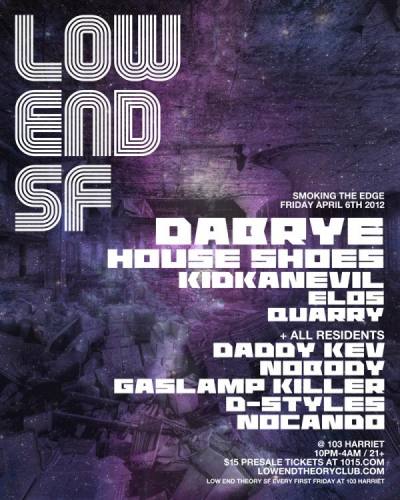 
Dabrye (an alias of Ann Arbor’s Tadd Mullinix) is best known for creating head-nodding beats with saw-tooth bass lines and a keen eye to forward-thinking production. With support from both the hip-hop underground and the electronic music press, he has earned a place in URB’s Next 100 and XLR8R’s Top 100 albums, among other accolades.


Dabrye’s trilogy began with One/Three in 2001, which was followed by the Instrmntl mini-album for Scott Herren’s (Prefuse 73) Eastern Developments label. Both releases earned glowing reviews for their handmade rhythmic style and minimalist execution. 2006’s Two/Three LP steps up the beatmaking ingenuity and spotlights Mullinix’s favorite underground MCs, including Doom, J Dilla, Vast Aire, and Wildchild to create a major statement for the new Hip-Hop sound of Detroit.


Detroit Hip-Hop's Ambassador to the World. Michael "HouseShoes" Buchanan has been an integral part of the long burgeoning Motown resurgence. Ask the people coming out of Detroit and they will confirm all of this. Houseshoes, a resident DJ at the Hip-Hop staple St. Andrews Hall from 1994-2004, has had personal influence over (at least) a full generation of emcees, producers, and then-future-DJs.


As a DJ, Shoes has toured extensively throughout the United States and Europe with Hip-Hop acts (Percee P, Guilty Simpson, Illa J, Exile, Aloe Blacc, Phat Kat, Slum Village, and Elzhi to name a few) as well as on his own. He has garnered the respect of acts far outside the scope of Detroit Hip-Hop by taking crowds somewhere they never planned on going, helping them discover more about music in the process.


As a producer Houseshoes has worked with some of Detroit’s elite musicians and emcees to help contribute to the soundtrack of his city. From the late and revered J Dilla and Big Proof, to Elzhi (Slum Village), Guilty Simpson (Stones Throw Records), Black Milk (Fat Beats Records), Ty & Kory (Buddha Brown / Sony), Now On (A-Side Worldwide), Phat Kat, Invincible, Finale, Big Tone, Ta’Raach, Marv Won, Danny Brown, and Stacy Epps. Houseshoes’ Podcasts (shoeshouse.podomatic.com) boasts holding one of the top 50 podcast portals (60,000+ subscribers) on a site of tens of thousands of hosted podcasts. He lives and works out of Los Angeles, Californi


Thunderous...a vivid display of dexterous beat construction and cultural experimentation. An incredible amount of character bubbles at the surface of each track - okayplayer


Sparse constellations of lethally-sharpened drum sounds flying around the listener act as a single structure of seemingly impossible strength...this is a record of borderline psychopathic focus - Wire Magazine


One of Alpha Pup's newest artists, ELOS is a child of Low End Theory. This Los Angeles native grew up on many sides of the city and was influenced early on by 90's West Coast hip hop, jazz and Japanese video game soundtracks. His entry into the world of electronic music production corresponded with the rise of the LA beat scene and the powerful inspiration of Low End Theory.


Found every Wednesday night at the front of the dance floor of the club night that has spawned a whole new generation of beat enthusiasts, ELOS throws down castles of sound that will rattle ceiling crumbs loose from the top of your skull. ELOS is only just beginning his musical path, so keep your eye on this kid and look up for his debut EP Flying Sky Fortress.