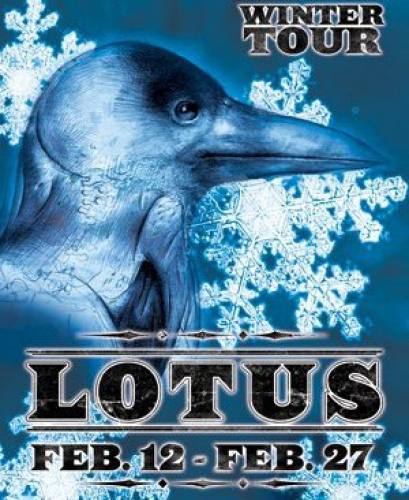 Lotus | 9:00 PM
Never a group to be pigeonholed, Lotus brings many musical weapons to the stage. From festival stages such as Rothbury, Wakarusa and Red Rocks to theaters across the country the band has left grinning crowds dripping with sweat. Equal parts dance and rock, Lotus has been crafting a unique brand of instrumental rock for the past decade.
Their latest release Oil on Glass/Feather on Wood "proves that no words are needed to elicit any feelings, the instrumentals alone are enough to connote a myriad of emotions." The dual EPs show the multiple sides of Lotus with Feather on Wood showcasing slow-building guitar driven compositions and Oil on Glass leaning toward harder beats and textures. Like a Lotus show, the two sides work together to form a cohesive whole.
The big light show and pounding beats may be club inspired, but the band's ability to connect with the audience through emotive composition and dynamic improvisation pushes performances past the elusive barrier dividing concert and experience.
Thick as Thieves and MarchOne bring the heat again. Light and sound galore....
Dj Kidsmeal | 9:00 PM
DJ KIDSMEAL started DJaying/Scratching records and producing beats/tracks at the age of 13 in 1996. REVIEW FROM THE NASHVILLE SCENE'S NASHVILLE CREAM BLOG: To say that I've been anticipating DJ Kidsmeal's debut record may be a bit of an understatement. I've used my bully pulpit to razz and harass him about it for almost 18 months. I have repeatedly taken the dude to task--in public, in print; wherever, whenever. Sure, it's sorta tacky and totally obnoxious, but the dude has been around forever and hadn't dropped anything that wasn't tethered to my damn computer. It was kinda vexing. Now that I've got the album on my stereo, I'm thinkin' it was worth tarnishing my sterling reputation of civility and sophistication. Secret Recipe is a stellar slab of instrumental hip-hop and you guys know how I feel about instrumentals. I was honestly expecting more turntablism, more crazy-technical displays of straight skill. Face it, the kid can cut like nobody's business, and he's got a crab scratch that's tighter than Glenn Beck's asshole. He could coast on expert dexterity and the fact that his dad played in Babe Ruth and I'd probably still be into it, but Kidsmeal's fleet fingers never overshadow the songs. Secret Recipe is crammed full of compelling horn stabs and big boom-bap breaks; psychedlic-pop frolicks at its fringe, and electro ear candy speeds through the Autobahn at the heart of the album. Grooves are at the forefront of each track, and atmospheric flourishes never overpower the central melodies, creating an engaging sound collage that is surprisingly musical. OK, it's not really a surprise. If you've seen Kidsmeal perform you know he has a keen ear for the party rockers, and if you've got a keen ear then you'll probably notice that tracks like "She's an Artist"--with it's sinewy bass lines and sparse, reverberating snare--have been part of Kid's live arsenal for some time. There's only one MC on the entire record, and that's my main man Maurice (better known as 247), and he doesn't even show up until "Cell," the 21st of 22 songs--more hip-hop records should follow this format. If DJs are curators of sound, then this, my friends, is one first-class mothafuckin' Guggenhiem-type exhibition shit right here. BY SEAN MALONEY -Nashville Scene