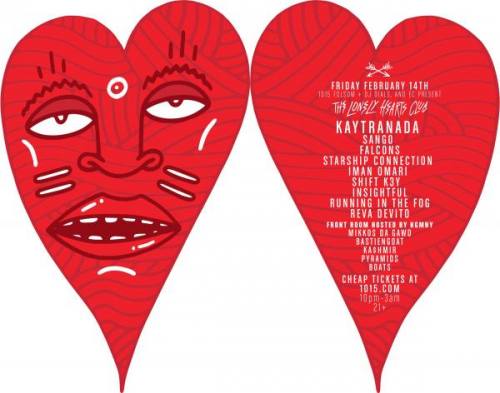 
RUNNING IN THE FOG

KAYTRANADA
Hailing from Montreal, Canada, this young beat maker and DJ is no stranger to production. Starting to produce in his early teens, and now at only 21 years of age, Kaytranada has the work ethic of a seasoned producer…

His influences come from all sorts of genres; genres ranging between Disco, Hip-Hop, House, and R&B. As of the last year, he has made a name for himself through bootleg remixes from artists such as Janet Jackson, Missy Elliot, TLC, Danny Brown, and Teedra Moses. Combined, these remixes have received millions of plays on Soundcloud and YouTube.

Kaytranada’s impressive lineup of tracks improved even more this past February with the 8 track original EP on HW&W Recordings (US) / Jakarta (EU), ‘KAYTRA TODO’. Featuring a track with Los Angeles singer and songwriter JMSN, this EP has received attention from blogs, artists, and press all over the world.

Keep an eye out for Kaytranada, as he plans to take his progressive and innovative production to fans in every corner of the globe.


SANGO
Sango is a hip-hop producer who was born in Seattle, Washington, and currently resides in Grand Rapids. He has been making noise worldwide releasing his own projects and creating remixes of timeless and contemporary-future artists such as Little Dragon, Frank Ocean, Aaliyah, and The Weeknd. In fact, Sango has been recognized and featured by The Weeknd and Drake themselves for his remix work! This is no surprise since he re-works classics into works that sound unknown and from the future.

“I produce with the love from above & my main inspiration comes from anything and everything. ” - Sango


FALCONS
FALCONS is an amalgamation of many things, a boiling pot of styles and genre-free influence. The musical tastes range from world music to southern rap, and everything in between. The only rules are to push the boundaries of conventional r&b, rap, and electronic music, exploring new directions, but never losing site of the dancefloor.
About | Advertise | Contact | FAQs | Terms of Use | Privacy Policy © 2020 - TheUntz.com. All rights reserved.