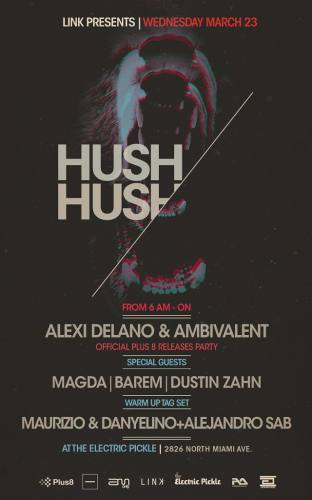 Only for the few who really intend to dance with us in the dark till the early afternoon of March 23rd.

Last year line up, kept secret until the last minute, was featuring a long tag set between ADAM BEYER, IDA ENGBERG and our co-host ALEXI DELANO after an epic opening by LINK resident DANYELINO;

This year we wont make a secret out of it and transform this intimate after in ALEXI DELANO and AMBIVALENT's new Plus.8- Brooklyn Weekdays E.P. official release party.

The dark atmosphere wont change since we'll steal from our "OFFICIAL MIAMI MUSIC WEEK OPENING PARTY" at ARKADIA m-nus special guest MAGDA, who already in December was able to impress the local crowd here at the Electric Pickle; also m-nus BAREM and drumcode DUSTIN ZAHN will help add even more spice to this