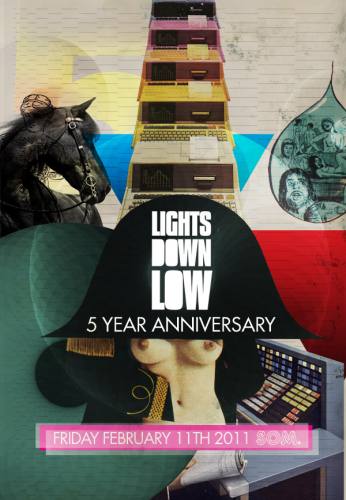 What: Lights Down Low 5 Year Anniversary

Together, we've danced hundreds of hours to the sounds of the best in dance music from the last decade. We've made amazing memories. We've spent some of our best years together...

To celebrate this occasion we are excited to bring you:

ABOUT KINGDOM: We here at LDL have been huge fans of Brooklyn based Kingdom for some time. DJs from Diplo to BBC’s Annie Mac have given his tracks spins, and with his recent signing to Fools Gold Records and the video for his debut single “Mind Reader” airing on MTV2, there’s no doubt that Kingdom is the young American producer to watch. Kingdom may play everything from kuduro to juke, but R&B is his first love, and it shows in his bass-heavy remixes and original tracks, often featuring R&B vocal samples on top of his trademark production style—what some have called “a Brooklyn take on the UK garage sound.” Kingdom has received praise from The Fader and XLR8R, to trendsetting sites such as Pitchfork and Discobelle. It's been a long time coming but the 5 year anniversary is the perfect event for his LDL debut.

ABOUT NGUZUNGUZU: Hailing from LA, NGUZUNGUZU (pronounced N GUZU N GUZU) make some of the weirdest bass-heavy electronic music out there. Fluokids described them as "Blaqstarr meets trance", which is kind of accurate. NGUZUNGUZU is Asma Maroof and Daniel Pineda and have been keeping busy with residing at their renowned party "Wildness" in LA, releasing their recent EP “Mirage” on Silverback Recordings and Asma going on tour with M.I.A (yeah, THAT M.I.A) as her DJ. We are ecstatic to bring to LDL what is sure to be one of the biggest upcoming acts in dance music in 2011.

ABOUT ACID GIRLS: this LA based, legendary duo are practically the 3rd LDL residents. They have been with us since the beginning and keep coming back for more. Greg and Jamie are great friends of ours. They always bring a selection of the best music you've never heard that gets you dancing till you can't. They never disappoint.