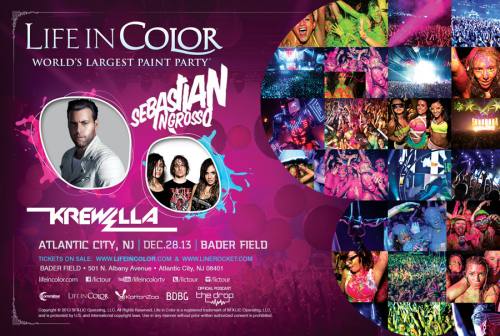 What: Life in Color @ Bader Field

Legendary DJ/Producer Sebastian Ingrosso and EDM sensation Krewella are set to headline the 2nd annual Life In Color concert at Bader Field in Atlantic City on December 28th, 2013. The doors open at 7PM and tickets are on sale now at www.linerocket.com.

Life in Color is “The World’s Largest Paint Party” and is nationally recognized as a one-of-a-kind concert experience featuring cutting-edge LED production and some of the most high-profile performers in the world.

Sebastian Ingrosso is one of the most prolific musical talents across the globe. As 1/3 of the prestigious DJ trio Swedish House Mafia, Ingrosso has headlined some of the largest music festivals and performed for crowds of over 100,000 people. He is also a world famous music producer, manufacturing numerous #1 songs on Beatport including “Reload” and “Calling (Lose My Mind)”. In addition, he has produced music for some of the biggest names in the music industry, including Kylie Minogue, Usher, and Britney Spears.

In 2012, Krewella burst onto the electronic dance music circuit with their debut video Killin’ It, showcasing their innovative brand of dubstep-infused tunes highlighted by melodic female vocals. They are currently embarking on their international 55-date sold out tour  on the heels of their debut album Get Wet, which charted in the Top 10 of Billboard’s Hot 200 in its first week. Krewella recently teamed up with charity organization Dance For Paralysis to help raise money and awareness for people living with paralysis. Founder Thomas E. Smith says, “It is truly an honor to work with Krewella and together we will work towards finding a permanent cure for paralysis”. LineRocket and Dance for Paralysis have plans to bring paralyzed teens from the local hospital to enjoy the show in the front row and to meet the 3 members of Krewella backstage.

In 2013, LineRocket hosted Steve Aoki, Tommy Trash, and Adventure Club on New Year’s Eve at Bader Field. The event sold out in rapid fashion and attracted thousands to the largest heated tent in America. LineRocket CEO Josh Heffler said, “The heated tent, star-studded lineup and top notch production provided attendees with the ideal concert experience. We expect this year’s event to top the success of the last one” The supporting acts for Sebastian Ingrosso and Krewella will be Dyro and Bow n’ Arrow, with more artists to be announced soon.