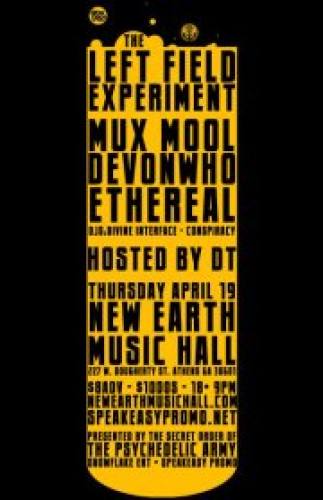 Hosted by DT (from Clan Destined, The Difference Machine)

I know it’s electronic music,” Brian Lindgren says, “but sometimes I feel like an old-timey traveling musician with an M-Audio Trigger Finger instead of a guitar.” As Mux Mool, Lindgren has been criss-crossing the country by himself for years, collecting records, loops, and samples, and rocking parties in towns both large and boondock-small. Lindgren is a self-confessed nerd to the bone, an incurable doodler, a Star Trek: The Next Generation fan; he lives on energy drinks and barely sleeps, spending his days working on music and his nights absorbing Internet memes by the hard-drive load. Mux Mool’s homespun electro hip-hop is the product of an introverted mind, an extroverted imagination, and a bottomless cultural appetite.

Lindgren’s life in music began in Minnesota with a cheap toy sampling keyboard (“I remember being so fascinated by how much a sound changed when you dropped it down several octaves”). Flash forward a few years (and more than a few keyboards), and the teenage Lindgren began recreating his favorite sounds – Dilla’s stutter-step beats, classic video-game music, abstract electronic noise – using software and digital effects, glazing them with tape hiss and vinyl static.

One of the Klipmode family - whose membership includes Suzi Analogue, mndsgn and Knxwledge - the LA via Portland-based producer, devonwho, makes awesome, synthy, low-slung beats that sit somewhere in between hip hop and experimental electronic music - if you’re up on Beat Dimensions or the Beatnicks 12”s you’ll know the vibe. Various members of Klipmode have done a series of EP releases entitled 3P (which can be yours for less than £5 - seek them out), and devonwho’s is out today - free of charge too if you are willing to give up your email address. Get on this early, click the link below to get a hold of it.