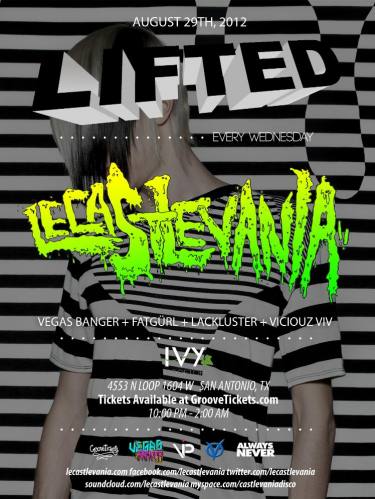 Very few can burst on stage and through speakers with boundless, electrifying energy like Le Castle Vania (aka Dylan Eiland) can. The Atlanta-based recording artist, producer, DJ, label owner and party champion has perfected the balance of distorted electro sounds and insuppressible dance vibes with a rock twist. Le Castle Vania has proven that originality will always prevail.

It all started back in 2006, when Eiland was asked to remix a track called “Black Eyes” from his friends and fellow Atlanta musicians, Snowden. After tagging the name “Le Castle Vania” to the remix, it hit the blogosphere to massive effect. It was then that he carved his signature sound: a balanced blend of gritty electronic beats, melodic synth leads, and rock aggression; resulting in banging electronic music that is dark and dirty yet equally uplifting. His music has flawlessly fused the influences and sounds of rock, indie, electro, and disco. From the haunting vocals in his single “Awake,” to his driving remix of Kaskade’s “Turn It Down”, Le Castle Vania has branded himself on the fact that he ignores musical fads and stays unfalteringly true to himself in his creation of music experiences.

Eiland has morphed from an underground Atlanta DJ to an internationally acclaimed electronic artist, performing dates at some of the biggest music festivals in the world such as Electric Daisy Carnival, Ultra Music Festival, and Starscape with the likes of Justice, Deadmau5, Skrillex, Nero, Kaskade, and Steve Aoki to name just a few.

In addition to his relentless touring, Eiland is an avid producer, engineer, and songwriter; when not on the road, he’s locked in the studio writing original tracks and remixing his favorite artists. As a producer, Le Castle Vania has created countless originals and remixes, generously giving many away to his dedicated fans. Since he’s always on the hunt for great tracks and upcoming artists, it was natural for Eiland to start Always Never Records, an independent label that has released his own musical projects, along with several new releases from upcoming electronic artists that Dylan wants to share with his fanbase.

Le Castle Vania is currently working on new material for his upcoming album, which will feature collaborations with a unique assortment of artists. You can catch him live throughout 2012 at solo tour dates around the world and as part of Identity Festival for the second year running, with this year’s line-up including Nero, Eric Prydz, Wolfgang Gartner, Madeon, and more. It’s all just part of Le Castle Vania’s plan to dominate 2012 and bring everyone with him. Are you in?