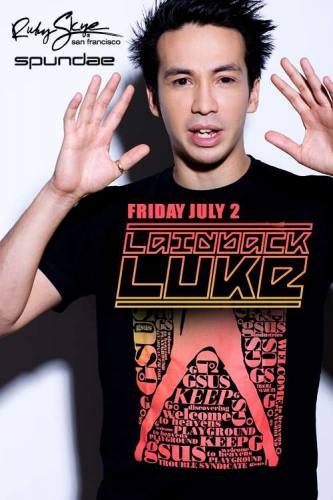 Luke is laidback about everything except music. Named best producer of 2008 by such qualified house maestros as David Guetta, Martin Solveig and Roger Sanchez, and landing an impressive new entry – voted # 46 – in DJ magazine’s Top 100 DJs Poll, it’s clear that Holland’s homeboy is on the rise like never before. It’s why he’s been bustin’ up bassbins from the Americas to Ibiza. Why he was selected to ignite the Stealth Live! CD series with a near perfect club mix. Why his party, Nighttime Superheroes, is such a winner. Why he was snapped up for a weekly mix show by French station Radio FG. And why he was invited by the UK’s Pete Tong to complete an Essential Mix on BBC Radio 1. Sure it’s been a long time coming (over a decade now) but Luke’s stratospheric success befits his world-beating talents and is ripe to reach new levels of hotness in 2009!
Laidback Luke (Luke van Scheppingen) was born in Manila, Philippines, but grew up in the Netherlands. He loved guitars, graffiti, hip-hop and house, and soon found a mentor in DJ/producer Dobre (The Good Men, Chocolate Puma). Luke was just a teenager when he began producing music, taking the ‘laid back’ tag from Snoop Dogg’s ‘Gin & Juice’. Yet by 1995 he was putting out tracks; and from 96 he was remixing for established artists like Green Velvet, Victor Calderone and Junior Sanchez, in addition to DJing professionally. The thriller from Manila proved to be a natural born killer behind the decks. Once beating a Dutch DMC champ in battle, Luke got to show the world how he rolls with CDJs ‘n’ EFX: rinsing every mix, building energy, skilfully fusing an array of old new skool flavours, edits, bootlegs and a cappellas into a slick signature style. He even released an album, Psyched U, in 1999. But it wasn’t until Virgin signed Luke’s seminal single ‘Rocking With The Best’ and released his 2002 album, Electronic Satisfaction, that his profile really soared. Luke’s Dance Valley anthem, ‘We Can Not Get Enough’, then blew up as a chart hit. He also mixed his first compilation album, Windmill Skill. His discography was therefore looking seriously prolific as he remixed Daft Punk (who were a huge early influence), Murk, Oliver Lieb and Tom Stephan. And to up the output in 2004, Luke introduced his own label, Mixmash.
More club-shaking times lie ahead for Luke with his non-stop DJ schedule, studio collaborations including David Guetta, and that all-important third solo album on the horizon… At this point, scrolling through his achievements may be exhausting enough, but imagine living that diary/discography. His secret? Well, besides being a nighttime superhero, a clue is in the martial arts that he practises. Yes, Luke has good ‘kung fu’, always keeping an ear to the ground while his music surges skywards!