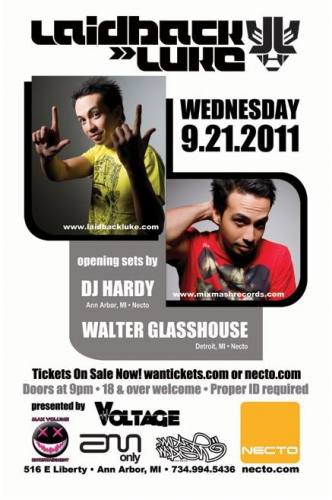 
In 2010 Dutch dynamo Laidback Luke is so supercharged and all over your body that it hurts. Blasting your bassbins with blockbuster beats, making your heads spin with his hybrid house styles, even cramping up your hands as you scroll down his discography! Recently, he’s worked with David Guetta, Diplo, A-Trak, Steve Aoki and Lil Jon, and remixed everyone from Black Eyed Peas to Calvin Harris and from Christina Aquilera to Moby. There have been three nominations for Luke in the Beatport Music Awards – and an International Dance Music Award (IDMA) gong in the Best House/Garage Track category for his work on ‘Leave The World Behind’. He’s sold out his own brand Super You&amp;amp;amp;Me parties at Miami WMC. Plus, he’s invited to join Cream for some Super You&amp;amp;amp;Me events at Amnesia in Ibiza. All this while kick-starting a compilation series, with Laidback Luke presents Super You&amp;amp;amp;Mefeaturing Avicii, via his own label, Mixmash Records, and still finding time to give the next generation of music makers a leg-up through his forum, at www.laidbackluke.com. He’s got over 30,000 followers on Twitter, is sent 12GB+ of promos every week, and boards more than 160 flights per year – without breaking a sweat. Sure his name is Laidback, however when the music’s jumping he’s anything but…


Born in the Philippines, raised in the Netherlands, as a kid Luke loved guitars, graffiti, house and hip-hop, taking the ‘laid back’ tag from Snoop Dogg’s ‘Gin &amp;amp;amp; Juice’. He had a mentor in Dobre (Chocolate Puma) and by 1996 was releasing tracks, remixing for established artists and DJing professionally. He even beat a Dutch DMC champ in battle. His first album came in 1999, and when Virgin locked down ‘Rocking With The Best’, then released his 2002 album, Electronic Satisfaction, his profile really soared. Following this he remixed the likes of Daft Punk, Murk, Oliver Lieb and Tom Stephan, introduced his own label, Mixmash, and went on to hook up with Steve Angello to remix ‘Sexy F**k’ and co-produce ‘Otherwize Then’. He also joined forces with the Swedish House Mafia on ‘Get Dumb’ and signed tracks to Angello’s Size, while ‘Rocking With The Best 2007’ blew up on Mixmash. Around this time his superhero-themedresidency – Super You&amp;amp;amp;Me – took off at Amsterdam club Paradiso. It was followed by another epic 12 months that saw Luke release five tracks and 18 remixes, ignite the Stealth Live! CD series with a near perfect club mix, host a weekly show on Radio FG, and perform almost 200 international DJ sets – including a BBC Radio 1 Essential Mix. It was also the year that witnessed him making a massive mark on Ibiza. After performing at all the top clubs, he produced/remixed every track on his Ibiza Closing Party mix for Mixmag and ended 2008 on another high: with ‘Show Me Love’ (by Luke and Steve Angello featuring Robin S), which entered both the Buzz and Cool Cuts Charts, and even reached # 11 in the UK’s official singles chart. Moving into 2009, his collaboration with the Swedish House Mafia on ‘Leave The World Behind’ became an Essential New Tune on Pete Tong’s Miami show and one of Beatport’s best-sellingtracks. His Super You&amp;amp;amp;Me party during WMC was also a huge hit, starring Diplo and A-Trak. Consequently Luke and Diplo produced ‘Hey’, which was supported by DJs like Kissy Sell Out on Radio 1. Of course, Luke’s remix skills continued to be in hot demand too, by, among others, David Guetta, Tiësto, Black Eyed Peas, Dizzee Rascal, Depeche Mode and MSTRKRFT. In fact, mash-ups like his remix of the Black Eyed Peas’ ‘I Got A Feeling’ with La Roux’s ‘In For The Kill’, his very own ‘My G*O*D* (My Guns On Demo)’ and Luke and Lee Mortimer’s ‘Blau!’ blitzed the globe from Australia to Ibiza, where he was nominated for best House DJ at the DJ Awards. As a result, he landed a&amp;amp;nbsp;&amp;amp;nbsp;#27 slot in DJ magazine’s Top 100 DJs Poll of 2009.


Performing and producing relentlessly and innovating musically as an artist like nobody else has propelled Luke and his superhuman fusion of hyperdrivehousestep&amp;amp;amp;ghettojacktrancebass to stratospheric new heights over the last couple of years. In 2010, he’s already remixed Wynter Gordon’s ‘Dirty Talk’, as well as Ferry Corsten, Calvin Harris and Moby, and his own projects, like ‘Till Tonight’ feat. Jonathan Mendelsohn, and ‘Turbulence’ by Luke and Steve Aoki feat. Lil Jon, have gone global. So what more can the new decade bring for our r-evolutionary rebel? Well, with the crazy energy that he conveys and the martial arts that he practises, rest assured it will be out of this world. Yes, our fresh-faced superhero has good ‘kung fu’, always keeping an ear to the ground while his creativity rockets skyward. Luke, we salute you!