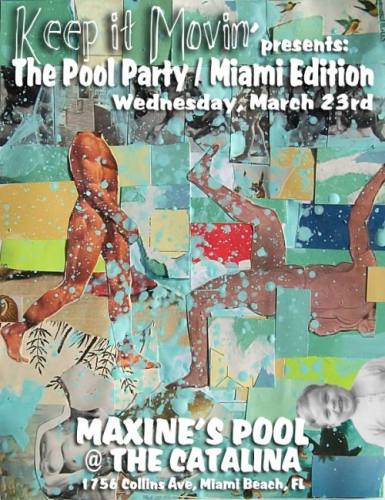 Keep it Movin' is proud to present to you Michel Cleis (Cadenza) & Robert Dietz (Cadenza), the 2010 stars with their Vagabundos party that took Pacha and Ibiza as a whole by storm this summer, are Kicking off the Ultra Party Week in Miami @ The Catalina Pool with none other then Mr. Den Ishu from Desolat. This is going to be a party you don't want to miss. Featuring Dance music star Michel Cleis with his #1 tune "La Mezca" and his summer anthem "Litoral"; Rising Vagabundo's star Robert Dietz who recently rocked Pacha NYC, Space and Liv Miami while on tour with Luciano; Upcoming Producer/DJ Den Ishu who has multiple releases off of top labels Desolat & Remote Area; the guys from one of top parties in NYC, the Keep it Movin' Crew - Dave Turk & Pasquale (Intact Music), Mike Terra (The Lost Borough) & Brian Best; Danielle Nicole (Frequenza / MiniTech Series), whose current EP is a Top 20 track on Beatport; will all bring their talents to South Beach to kick off Ultra Party Week.