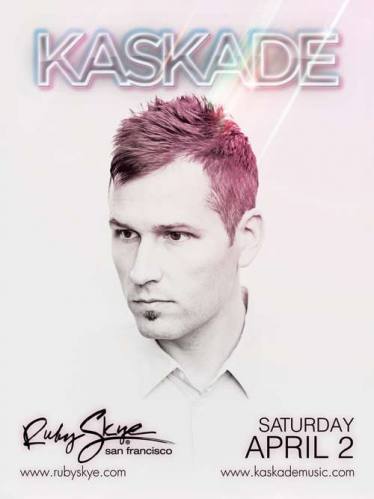 
Kaskade was born in 1972 in Chicago, Illinois. He later moved to Salt Lake City in 1992 to attend the University of Utah. During this time he owned and operated a local record store, Mechanized Records. In May 2000, Kaskade moved to San Francisco and began working as an A&R assistant for Om Records. Releasing his first single What I Say on the label in 2001.

Kaskade took his stage name from a nature book when he saw a picture of a waterfall and a co-worker agreed cascade was a good choice, but he then changed the spelling.

Upon signing with Ultra Records in late 2006, Kaskade subsequently left Om Records and now only releases with the former.

Most recently Kaskade has worked with Canadian house/electronic DJ/artist Deadmau5 to produce tracks on Strobelite Seduction, including the first single (released as an EP) Move For Me. The single became his fifth top ten hit on Billboard's Hot Dance Airplay Chart, reaching the number one position in its September 6, 2008 issue. It also gave Kaskade his first number one single on this chart. The dance single has become a crossover hit, managing to reach number 71 on the Canadian Hot 100 as of February 14, 2009. The follow up single, Angel On My Shoulder, also found success on the dance chart, placing at number 5 on Billboard's Hot Dance Airplay Chart. I Remember, another collaboration with Deadmau5, became his first UK hit, peaking inside the top 15 on the Uk Singles Chart. The video-clip which accompanied I Remember was filmed in Manchester, England. The single became his second chart topper on the Billboard dance chart.