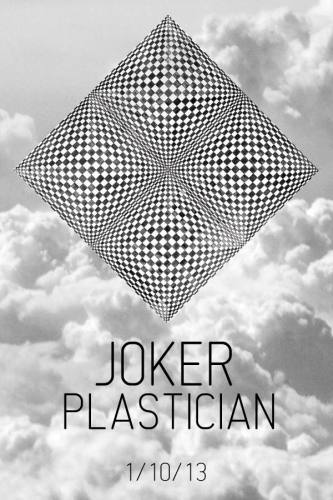 
Liam McLean, a producer from Bristol, England, debuted as Joker in 2007 and released over a dozen 12” singles and EPs through early 2011. Tracks like “Snake Eater” (Soul Motive, 2008), “Holly Brook Park” (Kapsize, 2008), “Digidesign” (Hyperdub, 2009), the Ginz collaboration “Purple City” (Kapsize, 2009), and “Psychedelic Runway” (Kapsize, 2009) built and sustained McLean’s reputation for creating some of grime/dubstep’s most colorful and powerful productions. Later in 2011, after signing to the 4AD label, Joker released his first album, The Vision, which featured several tracks with vocalists, including Jessie Ware, Silas Bjerregaard of Turboweekend, and several MCs.


Chris Reed, also known as Plastician (formerly Plasticman), is a grime and dubstep DJ and producer from Thornton Heath in the London Borough of Croydon. Plastician has played a role in the popularity of the genre thanks to his participation in the Rephlex Grime compilations, his primetime pirate radio shows and his recent BBC Radio 1 Residency slot. In addition to his worldwide DJ schedule, Plastician has released records on labels such as Rephlex Records, Soulja, ROAD, Slimzos, A.R.M.Y. and Southside Dubstars. His musical style connects east London grime to the south London dubstep scenes. Plastician also runs his own label; Terrorythm Recordings. Plastician also played a big role in putting together the “Cashmere Agency Presents Mr. Grustle & Tha Russian Dubstep LA Embrace The Renaissance Vol.1 Mixed by Dj Plastician.” mixtape that was released in June 2009.