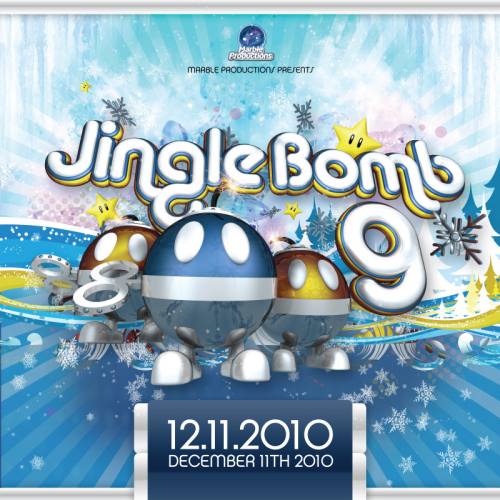 Marble Productions once again brings you the winter ritual that is "Jingle Bomb".

For the 9th year we turn up the awesome with amazing headliners, top locals and mind melting production.

-A lot has happened since LA Riots branded dance music with a bawdy blend of Indie electro in 2007. Founding partner Daniel LeDisko has since teamed with fellow veteran DJ/producer Jon Pegnato to reinvent a sound that melds influences of techno, house and drum n’ bass. In widening their production scope, LA Riots has managed to maintain underground credibility while remixing for some of the industry’s premier pop and rock labels.

The original Riots garnered multiple successes, including a North American tour supporting MSTRKRFT with the Bloody Beetroots in 2008 and a spot at Australia’s Global Gathering Festival alongside Kraftwerk, Mark Ronson and Sasha that same year. But by summer 2009, LeDisko aimed to evolve beyond straight Indie electro and explore house and techno production while J.O.B. wanted to head into the mainstream production world, so they decided to go their separate ways. A chance meeting with veteran DJ/producer Pegnato during a San Bernardino set would prove to be a turning point for LA Riots; the two collaborated in the studio and clicked on instant creative chemistry.

Their first studio session yielded some bass-heavy gems, including “The Drop,” their debut original track on Brooklyn-based label Fool’s Gold (A-Trak and Nick Catchdubs). Since then, LA Riots have broadened their musical scope even wider, garnering play from the likes of Crookers, Brodinski and Drop the Lime, to name a few. And while the duo has remixed tracks for a diverse roster of artists including Tiesto, Laidback Luke and Sidney Samson, they continue shining up pop and rock remixes for major labels such as Warner Bros., Virgin, Tommy Boy and Interscope.

Their high-profile productions have landed even higher profile gigs in 2009, including tours with The Crystal Method (“Divided by Night”) and a second with MSTRKRFT as well as appearances at Chicago’s Lollapalooza, ULTRA Music Festival in Miami (2008 and 2009) and Belgium’s Pukklepop Festival. Additionally, Beatport named them as “Break Out Stars” at 2010’s Winter Music Conference.

-Is there a CD wallet in the land which doesn't have one of Will Bailey's bullets stashed away? Some of the most influential DJ/producers around the world are currently trumpeting Will's impressive production skills, and dancefloors from London to L.A have been destroyed by his explosive sets - featuring grimy electro house, techno touches and surprise drops of cross-genre killer tracks.

Re-inventing himself more times than Madonna, Will's many aliases (including the in-your-face Twocker, techno beast Rudi Stakker and fidget force Bass Weazal) have been causing a ruckus on the airwaves with over 30 recent Radio 1 plays alone. Props have been coming in thick and fast from across the DJ spectrum: Pete Tong, Armand Van Helden, Wolfgang Gartner, Judge Jules and Fatboy Slim have all recognised Will Bailey's talents in 2009, while Galaxy Radio kingpin Andi Durrant described Will's productions as "proper get-out-of-jail tracks."

A regular player in the top of the beatport charts with over 100 releases to date, Will's recent massive 'Hit The Club' banger loomed large in all credible bassbins at the end of last year, receiving heavy radio support from Kissy Sell Out, Pete Tong and Judge Jules, while a long list of DJs including Crookers, mstrkrft and Paul Oakenfold gave it considerable club rotation.

With a natural ear for heavy hitters, it was clear that the Birmingham-based studio whizz would find success with his own label Simma. With a collaboration between himself and Hot Mouth ('Underwear Funk') and Aniki and Bling Fingah released in the autumn of 2009 and more in the pipeline, plus a series of crazy Simma parties held in mystery locations, it looks as if Simma's already boiling over. Recently crowned resident for the world famous clubbing institution Gatecrasher, Will has a presence that's hard to ignore. With a huge U.S fanbase, he has already conquered the Burning Man Festival in the Nevada desert, the Electric Daisy Carnival, Kosmic and Atlantis festivals in L.A plus a string of gigs in Chicago, Buffalo, Seattle, Denver, San Francisco to name a few.

-The Polish Ambassador, also known as Ample Mammal has been rocking shows nationwide with an electrifying blend of glitch hop, breaks, and dance music sure to make that booty bounce. Not pigeon holed to one specific genre, the Ambassador rips up and down the tempo range, building all of his sets live from a monstrous stash of 100% original beats, bass, synth, and vox lines. Think the party atmosphere of Girl Talk combined with the skill and dexterity of Pretty lIghts and you have some idea of what he's throwing down.

"Taking music as you know it and feeding it through a human being dosed with only the most complex computer algorithms."

-Plus much more still to be announced!