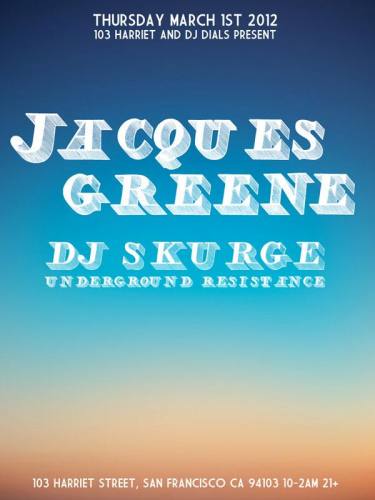 
Jacques Greene has realized the progressively deeper ideas of what music can mean in 2011 with a slew of remixes for the likes of Katy B, Jimmy Edgar and Radiohead that haven’t skipped a beat. Jacques has yet to make a West Coast appearance and after years of trying, we have finally done it. He's kept in the studio and ready to perform his unique blend of rnb and deep dance music. He came out the gate with two strong records for Lucky Me and nothing short of an anthem on the Night Slugs Allstars CD and grew like real artists should, with steady high performing releases. A stellar white label release, hype from all over the world, and support from some of the biggest djs in the world has proven that this young producer has the world at his feet. Jacques Greene is here for the long run. This plan was a long time coming. Come witness his first San Francisco Appearance.


DJ Skurge is one of Underground Resistance's most trusted and proficient producer/DJ sound snipers in the current UR camp. Chosen for UR's most high-pressure gigs, DJ Skurge has traveled the globe as the DJ/keyboardist for some of the most legendary techno bands in the world: UR's Galaxy to Galaxy, Interstellar Fugitives, The Aquanauts, Jeff Mills’ "Something in the Sky" project and Juan Atkins’ pioneering Model 500 band. Not to mention, DJ Skurge has performed scores of DJ sets along the way including an appearance at the Montreaux Jazz Festival 2007.


DJ Skurge, when not touring, has somehow found the time to release some genre-altering Ep's, as well as multiple appearances on UR's ongoing Interstellar Fugitive CD series. DJ Skurge is one of the founding members of UR's The Aquanauts, a group featuring Tyree Stinson, the younger brother of Drexciya's James Stinson. DJ Skurge has contributed to the current Model 500 releases now appearing on R&S Records (Belgium). He also has released two exclusive mix cd's for the Japanese label Underground Gallery Productions.
About | Advertise | Contact | FAQs | Terms of Use | Privacy Policy | Accessibility Policy © 2021 - TheUntz.com. All rights reserved.