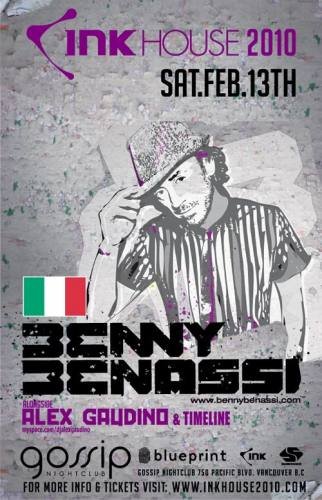 INK Ent : Blueprint Events : Substance Group
Present
|||| BENNY BENASSI ||||
Italy | myspace.com/bennasi
Alongside Alex Gaudino
myspace.com/djalexgaudino
W/ Timeline
After a decade of dj-ing in clubs around Italy, Benny Benassi rocketed to international stardom in 2003 with the track "Satisfaction", acclaimed by the likes of Timo Maas, Carl Cox, Dj Hell and Fatboy Slim. The tune dominated all the key charts the world over, won countless awards and suddenly Bennys name was on everyones lips.
Since then, Benny has put out several singles and a million-copy-selling album, gained a stable position as one of the worlds 20 most highly rated djs, remixed Outkast, Goldfrapp, Moby, Felix Da Housecat and Etienne De Crecy, among others, mixed a compilation for Erick Morillos famous Subliminal label and founded his own label, Pump-kin Music.
To kill time before releasing another groundbreaking monster, Benny has produced numerous hits with his faithful studio partner and invisible twin, Alle, under the trademark of Benassi Bros and put out the controversial "Who's Your Daddy?".
Full biography & discography on www.bennybenassi.com