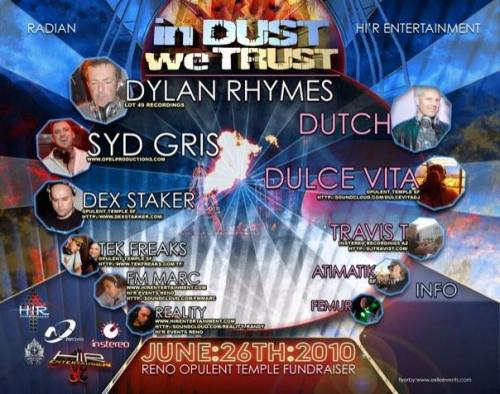 What: In Dust we Trust

In Dust We Trust - June, 26th 2010
Reno Opulent Temple Fundraiser
DYLAN RHYMES
(Lot49)
Marvin Beaver hides behind the Dylan Rhymes name when producing, remixing or arranging electronica music. He managed to get past the flashlights and you’ll find it hard to find a bio on him on the entire web.
After leaving school, a chance meeting with a nu-beat-writing co-worker who was selling his equipment to go traveling led to Marvin’s first “studio”. Supplemented with the now legendary Roland TR808 and TR909 drum machines Beaver started, as most people did in dance music in the late eighties, by putting out a few acid house white labels. Before long the talent was noticed by owners of the seminal Wax Factory imprint, Ron Wells and Chris Simmons, who began to release more of his material. Dave Pearce’s Reachin Records also bought into the young producer’s skills, fuelling the fire and enabling Beaver to set up a commercial studio with his mate Justin Drake in the early 1990s.
Leaving Peace Division to focus on his own material, Beaver invented the Dylan Rhymes moniker (a reference to Bob Dylan) and set about working on a breakbeat track for Junior Boys Own. The result was 1996s “Naked & Ashamed” which, due to a Smirnoff ad campaign, became one the label’s biggest tracks (no mean feat considering JBO’s pedigree). Since then he has cemented his reputation as one of the leaders of the electro, breakbeat and tech house scenes, through his output on Kingsize Records, Meat Katie’s Whole9Yards and his own Blue Black + Lot 49 imprints.
Besides original work, Beaver has also remixed the likes of Deep Dish, Infusion, Dave Gahan, Overseer, Unkle and Puretone while he has collaborated with Meat Katie, Christian J, Force Mass Motion (as Silencer) and Anthony Gorry (on his 2004 album, Dead Famous).
You can catch him playing all over the globe at regular haunts such as SXSW, WMC, FABRIC and his favorite places to play San Francisco + Burning Man!
www.myspace.com/dylanrhymes www.twitter.com/dylanrhymes www.dylanrhymes.com
Dutch
Syd Gris
www.opelproductions.com
TekFreaks
http://www.tekfreaks.com/tf/index.html
(Cosmic Selector)
(Jeff Taisch)
Dex Staker
http://www.dexstakker.com/
Ducle Vita
http://soundcloud.com/dulcevitadj
Atimatik
http://www.youtube.com/watch?v=T51ucN3qBas
Travis T
http://djtravist.com/
Reality
http://soundcloud.com/reality_randy
FM Marc
http://soundcloud.com/fmmarc
Femur
http://www.opulenttemple.org/
About | Advertise | Contact | FAQs | Terms of Use | Privacy Policy | Accessibility Policy © 2022 - TheUntz.com. All rights reserved.