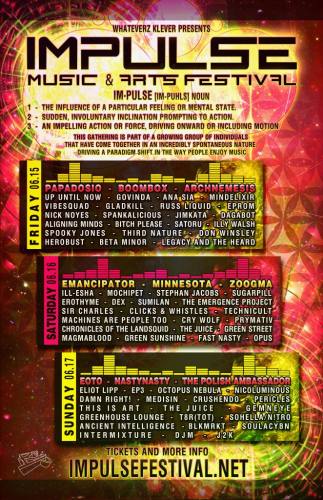 
1. the influence of a particular feeling, mental state, etc.

3. a psychic drive or instinctual urge.

4. an impelling  action or force, driving onward or inducing motion.

IMPULSE Music & Arts Festival is unlike most mainstream festivals in a very distinct way.  IMPULSE was created by artists with a vision to give other artists a new foundation and platform for spontaneous creation and colloboration.  In recent years, the festival circuit has been diluted with corporate money- choking out the essential reason to have such gatherings.  A grassroots festival, based completely on the love and passion that brings artists and fans alike together.