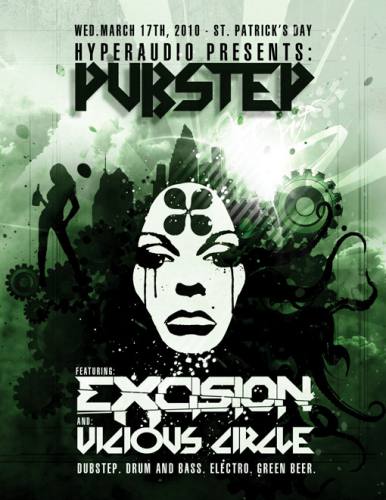 This St. Patty's, HyperAudio presents yet another bass-fueled night of dancefloor carnage, featuring the biggest names in broken beat / bass music up close and personal. We hope you enjoyed your Bass Gravy - now get ready for PUBSTEP
Lineup:
DJ EXCISION - Rottun Recordings, EX-7, Circle - Kelowna, BC Canada
This man needs no introduction - absolutely the filthiest, most insane dubstep DJ in the game, without question. 2009 has seen Excision dominate the dubstep charts, and demolish dancefloors the world over - with remixes/collabs for Noisia, Datsik, Apex, Freestylers, and Pendulum already in the pipe, 2010 can only get better. Excision's Shambhala mixes are responsible for converting many of us from casual listeners to full-on dubstep fanatics. Forget the pricey roadtrip, and plan your days off accordingly.
VICIOUS CIRCLE - Renegade Hardware, DSCI4, Evol Intent - UK
It wouldn't be a Hyperaudio event without drum & bass - and if you've been into the music for awhile, you might wanna grab a towel. Making a rare stateside appearance, the masterminds behind dancefloor anthems like "Hellrazor", "Welcome to Shanktown", "Odd Number", "Jackhammer Remix", and many more make the trek to Sin City to unleash an hour of the most upfront funk on the scene.
FLINCH - Trouble & Bass, T&A, Party Like Us, Dim Mak - LA
As half of production outfits True Pseudo (with 12th Planet) and Natural Kauses, Flinch has earned releases and remixes on a who's who of labels from electro-grime, to dubstep to drum and bass. Expect a mind bending low-end assault from all directions.
KING - Shift Recordings, Play Me Records, SMASH! Crew - LV
The SMASH! Crew CEO has been making waves in the global dubstep scene with a fresh helping of tunes and remixes on some seriously heavyweight labels. Make sure to cop his tracks on Beatport, support your local artists!
BARE aka REBORN - Terminal Dusk - LA
A fresh name on the LA dubstep scene - Bare's hiphop-infused floor killers currently have DJ support from the likes of Funtcase, Noah D, frequent production collaborator 6blocc, and more. This guy is a machine, cranking out new material almost on the daily - tune in for a heavy dose of what's next for 2010.
METAPHASE - Blipswitch, Pure Filth, Betamorph - LA/LV
A local favorite - Metaphase absolutely killed it at Bass Gravy, fitting right in with the world class talent he set the stage for. Naturally we had to invite him back this time around, before he sets off to obliterate the WMC.
RIZE vs QUIET (dark dank dubwise set) - HyperAudio - LV
Vegas drum & bass dons Rize and Quiet have been hard at work in the lab, refocusing their energy on the darkest, dirtiest dubstep imaginable. It's anybodys guess how long before the drum and bass comes out, but we're cool either way.
Mic Control by:
SPECIALIST MC- Detn8or - LV
*** PLAN YOUR DAYS OFF EARLY ***
This event is strictly 21+ with ID - Please don't forget yours!
Forbes has a "common sense" dress code - no shorts, wifebeaters, backpacks, bandanas, gang attire, pajamas, or open toed shoes on guys. Everything else is just fine - jeans, tshirts, hoodies, sneakers, whatever. Out of 350+ heads, there were two issues last time. Let's shoot for zero this time out.
Other Stuff:
- Cheap bottle service and private rooms - Everyone in Vegas says this, we back it up. Get a group together and go in on it, you'll be glad you did. Call 702-368-2801 to reserve - say Joe told you to call for the best rates!
- Ultra-crisp Turbosound system by AWOL
- Green beer & whiskey specials on rotation throughout the night
- Pan-Asian cuisine served 24 hours!
- We share a parking lot with three our four other businesses - we strongly suggest arriving early, and/or carpooling to avoid lot rage and long walks.
- PLEASE DONT DRINK AND DRIVE. Make arrangements ahead of time, or if you overdid it, call a cab / Designated Drivers. 702-456-RIDE
Feel free to direct message with questions. See you on the floor!