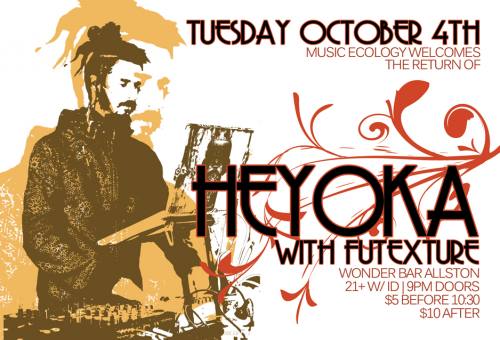 Over the last five years, Andrei Olenev AKA Heyoka, has been bringing a unique twist on glitch hop and psychedelic bass music, emerging as a staple producer and performer throughout the west coast electronic music scene and burning man community, as well as branching into the international glitch hop and bass music movements. Heyoka has brought his signature sound to festivals such as: Symbiosis, Sonic Bloom, Raindance, Lightning in a bottle, Big Bounce, Alchemeyez, and large sound camps of Burning Man such as Nexus, El circo, Temple of Boom, Entheon Village, Roots Society and Fractal Nation. He has also brought his music to several International Festivals such as Shambhala (Canada), Boom (Portugal), Erthfreq and Winter solstice (Australia), and Luminate (New Zealand). Heyoka has a hectic touring schedule throughout North America, regularly visiting clubs, warehouses and festivals of various underground music scenes.

Heyoka’s sound blends elements of many musical styles into something that is mind bending and indefinable. While listening to his music, you are taken on a journey through fractal soundscapes and alien dimensions, while riding a wave of fat glitch beats and sub bass. In his live sets, Heyoka chops up and remixes his own original music, always keeping it fresh and hot on the dancefloor. Heyoka’s sound evolves album to album, frequently being reinvented while maintaining a unique flavor that is unmistakably “Heyoka”. He releases his music mainly on San Francisco’s Muti Music, a leader in the glitch hop and bass music scene.

The response to his emergence so far has been overwhelming as Heyoka manages to stand out amongst bass music producers with an almost cult like following due to his unique take on all things ‘Glitch’ and ‘Bass’ centric.

Futexture is the exploration of (trans)personal experience through sound. For David Krantz, former producer of Agobi Project and 22 year old musician based out of Asheville, NC it is the logical evolution of a lifelong musical obsession.

Combining the rhythmic appeal of dubstep and hip hop with melodic dreamscapes and creative sound design, Futexture skillfully weaves a futuristic blend of glitchy bass-heavy IDM and jazzy techstep into a forward thinking sound that defies classification. This unique sonic synthesis is equally suited for both headphones and the dancefloor, and many have described it as a breath of fresh air in electronic music today.

A new project as of late 2010, Futexture has been well received in a variety of musical circles. In the first six months of 2011 he has shared the stage with Tipper, Bassnectar, Kilowatts, Nasty Nasty, Bonobo, Ana Sia, Big Gigantic, Heyoka, Falty DL, Bird of Prey, Mimosa, Mindelixir, and Mount Kimbie, and Vibesquad.

Other upcoming events at Wonder Bar:

For this and future events please visit