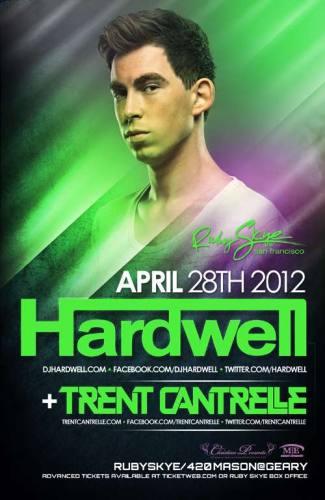 This talented genius, better known as Robbert van de Corput started his DJ career at the age of 13. After this blow-out Hardwell’s talent was picked up by a Dutch label and they signed him when he was only 14 years old. Shortly after his label signing he started to play at all mayor clubs in the Netherlands.

His growing reputation and success was picked up by party-minded people, they voted for him for the DJMAG Top 100 this year and he got a well deserved #24 spot in the Top 100 list, his first entry into their charts. They pinpointed him as one of the leaders of a new generation of DJs and unequivocally one to watch in the future. The growing momentum of his ‘fresh and open-minded’ label, Revealed Recordings, certainly proves their point, and fans can expect loads of exciting new releases very soon.

Hardwell’s international breakthrough came with his Show Me Love vs. Be bootleg of Steve Angello and Laidback Luke’s track and Robin S’ classic. That bootleg became one of the biggest and most played dance hits of 2009.

In 2010 Hardwell went on to release several noteworthy tracks such as Alright 2010 ft Red Carpet and Feel so High ft I-Fan, licensed to 10 countries. Tracks like Molotov and Voyage and Move It To The Drum, a co-production with Chuckie, have had great support from the biggest names in the scene.

After launching his label Revealed Recordings in 2010, Hardwell also started with the release of the brand new Revealed compilation series. Hardwell presents Revealed gives you a clear vision about the sound Hardwell and the label represent. After two successful editions he will soon bring you volume three of the Revealed compilation series. On top of this killer list, Hardwell’s Eclectic Beatz compilations are some of the best selling mix albums of the last few years with 10 editions released in total. This summer he was also chosen to mix the 2011 Amnesia Ibiza compilation.